INVESTIGATING THINGS IN THE ENVIRONMENT

Air is a mixture of gases. The gases that make the air include Nitrogen, Oxygen, . Carbon dioxide and Rare gases (also called inert gases or noble gases). Air is found in the atmosphere.

The table below summarizes the composition of air in the atmosphere.

Using a pie chart we can show composition of air as follows; 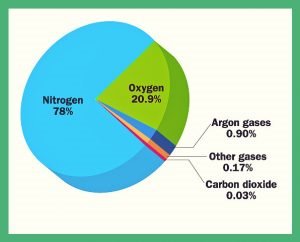 The different gases found in the air have different uses in our daily life. Below are some of their uses;

Examples of rare gases are neon, argon, helium and krypton.

Respiration - Oxygen is used during respiration in both animals and plants. Respiration plays a vital role of burning food to produce energy for living things.

Experiment : To show that oxygen is used in burning.

Procedure: Light the two candles. Cover one candle and leave the other uncovered. Observe what happens after a short time and record your observations.

Figure to show that oxygen is used in burning.

Observation: The candle that is covered with a glass goes off after sometimes while the candle which was not covered continued to burn.

Conclusion and suggestions: The covered candle used all the oxygen in the glass for burning hence went off. The uncovered candle continued to burn because it had continous supply of oxygen from the atmosphere.

To show the percentage composition of oxygen in the air.

You need the following- A candle, water trough and a graduated glass jar.

Light the candle and put it in a glass jar of air inverted over water and arrange the materials as shown in the diagram below.

The essential needs for plants growth.

Plants are living things and oxygen is one of the essential needs for living things. Plants need oxygen all the time to carry out respiration. During the day, plants carry out photosynthesis giving out oxygen as a by-product. The plants use some of the oxygen for respiration and the excess oxygen is released to the atmosphere through the stomata.

Oxygen is important for plant growth because through respiration, energy is produced which helps in the absorption of nutrients and division of cells hence plant growth.

Light is used by plants to make food during photosynthesis. Some of the food is burned during respiration to release energy, while some is stored for future use such as during seed germination.

Experiment: To show that light is important for photosynthesis.

Method: Make a small hole on the light proof box and place the potted plant in the box. Leave the set up for some few days. Make sure the plant has enough water.

Observation: What happens after a week? Record the observations. 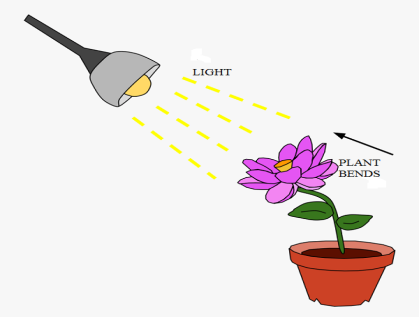 Water is very important for plants growth because it helps in transportation of nutrients in the plants. Water is also a raw material for photosynthesis.

Experiment: To show that water is essential for plants growth.

Methods: Arrange the setup as shown on the diagram by placing the seedlings at one end of the trough and a porous pot with water at the other end. Observations: Observe what happens after two to three days and record your observations.

After a few days, the roots of the young plants bent towards the water. This aids plants to obtain water for growth. This action of plants roots growing towards water is called hydrotropism. Lack of water leads to death of plants: Some plants growing in dry areas have adaptive features to conserve water.

Plant growing in dry areas adapt to their environment through the following ways:

Deep roots: - Roots of some desert plants penetrate very deep into the soil in search of water deep under the soil.

Shedding of leaves: - deciduous plants such as neem tree shed leaves to reduce water loss through transpiration. Transpiration is the loss of water through the stomata in the leaves.

Small or thorn- like leaves: - Desert plants e.g. cactus have thorn- like leaves and manufacture food with their succulent stems. Acacia plants have small leaves with thorns. This helps to conserve water through reduced transpiration.

Waxy cuticle- the stem of some desert plants are covered with a waxy shiny layer called cuticle. The cuticle prevents loss of water through transpiration. 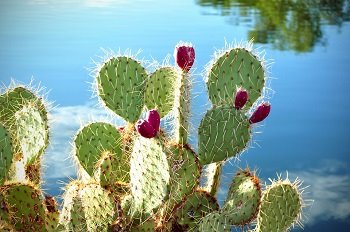 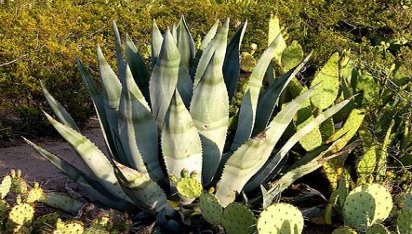 Carbon dioxide is used by green plants during photosynthesis. The plants carbon dioxide from the atmosphere and also from respiration. Note that plants take in carbon dioxide during the day time only to manufacture food.

Plants needs nutrients to grow well. Fertile soils provide plants with the necessary nutrients for growth. If soil lacks nutrients, plants will not grow well. As plants continue to draw nutrients from the soil, the nutrients decrease and if not replaced, the soil become exhausted. The following are methods of maintaining soil fertility.

Some plants like Pitcher plants have distinctive adaptations for living in nutrient-poor soils and feed on insects to obtain the vital nitrogen that they need to grow. These plants are called carnivorous plants or insectivorous plants.

Photosynthesis is the process by which green plants manufacture their own food from water and carbon dioxide in the presence of sunlight. In this topic we are going to observe closely the parts involved in photosynthesis.

External parts of a leaf and their functions

A leaf is a very important part of a plant because in most plants, photosynthesis takes place in leaves.

Experiment: To investigate the external parts of a leaf.

Procedure- Detach different green leaves from different plants and observe the external parts. Draw and label all the parts you can see.

Identify the following parts in your leaf; lamina, midrib, petiole, side veins, margin and apex and compare your leaf with the diagram below. Observe the texture of the upper and lower parts. 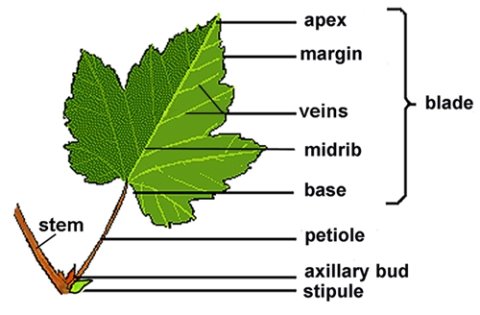 The main external parts of a leaf and their functions are as follows;

The internal parts of a leaf. 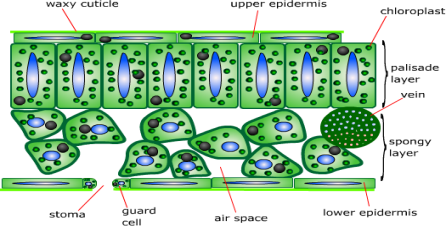 Functions of the internal parts of a leaf

The end products of photosynthesis are oxygen glucose and water. Part of the oxygen is used by plants during respiration and the excess is released to the atmosphere. Glucose is use by plants during respiration to release energy and excess is converted into starch or oils, and stated m the storage parts of the plant such as stems or roots. The water produced is used by the plant and excess released to the atmosphere through respiration.

Soil – This is the loose material found on the upper layer of the earths surface . Soil is composed of water, humus, living organisms mineral particles and air.

Activity:To investigate the composition of soil.

Procedure: Put the sample of soil in the transparent glass, add some water and shake gently. Leave the contents to settle and record your observations.

Observations: the soil forms distinct layers with gravel remaining at the bottom.

Conclusion: soil is made up of different layers. The arrangement of the soil in layers from top to bottom is called soil profile.

This is as shown below; 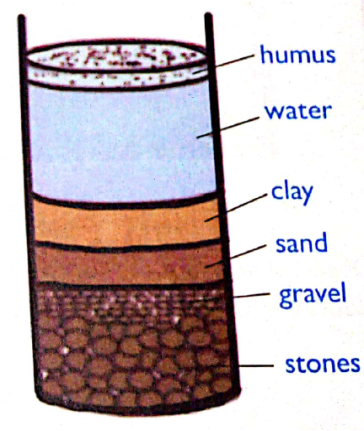 We can show that soil contains air as follows;

There are three types of soils;

This is the smoothness or roughness of the soil. Different soils have different textures; for example

The general characteristics of the three soil types are as follows;

Soil erosion is the carrying away of the top fertile soil mainly by water and wind. Things which contribute to soil erosion in one way or the other are called agents of soil erosion.These agents include wind, rain (water), human beings and animals

When it is raining, the rain drops make the soil loose and easily carried away by the flowing water. On the other hand, when strong winds blow over bare soils, it carries away the top fertile soil, depositing it to another place. Animals and human activities like deforestation and cultivation make the soil loose and bare, accelerating the rate of soil erosion.

The rate at which the soil is eroded depends on different factors as explained below.

Factors that increase the rate of soil erosion

These methods all protect the soil from the damaging effects of rain-drop impact. Most will also improve soil fertility.

Mulching
Bare soil between growing plants is covered with a layer of organic matter such as straw, grasses, leaves and rice husks - anything readily available. Mulching also keeps the soil moist, reduces weeding, keeps the soil cool and adds organic matter. If termites are a problem, keep the mulch away from the stems of crops.

Cover crops and green manures
Cover crops are a kind of living mulch. They are plants - usually legumes - which are grown to cover the soil, also reducing weeds. Sometimes they are grown under fruit trees or taller, slow maturing crops. Sometimes they also produce food or fodder. Cowpeas, for example may be used both as a cover crop and a food crop.

Green manures - also usually legumes - are planted specially to improve soil fertility by returning fresh leafy material to the soil. They may be plants that are grown for 1-2 months between harvesting one crop and planting the next. The leaves may be cut and left on the surface of the soil as a mulch or the whole plant dug into the soil. Green manures may also be trees or hedges which may grow for many years in a cropping field from which green leaves are regularly cut for use as mulch (alley cropping).

Mixed cropping and inter-cropping
By growing a variety of crops - perhaps mixed together, in alternate rows, or sown at different times - the soil is better protected from rain splash.

Early planting
The period at the beginning of the rainy season when the soil is prepared for planting, is when the damage from rain splash is often worst. Sowing early will make the period when the soil is bare, as short as possible.

Crop residues
After harvest, unless the next crop is to be immediately replanted, it is a good idea to leave the stalks, stems and leaves of the crop just harvested, lying on the soil. They will give some cover protection until the next crop develops.

Agroforestry
Planting trees among agricultural crops helps to protect the soil from erosion, particularly after crops are harvested. The trees will give some protection from rain splash. Fruit, trees, legume trees for fodder or firewood and alley cropping all help reduce soil erosion.

Minimum cultivation
Each time the soil is dug or ploughed, it is exposed to erosion. In some soils it may be possible to sow crops without ploughing or digging, ideally among the crop residue from the previous crop. This is most likely to be possible in a loose soil with plenty of organic matter.

Barrier methods all slow the flow of water down a slope. This greatly reduces the amount of soil which run-off water can carry away and conserves water. Any kind of barrier should work. To be effective any barrier must follow the contour lines.

Man-made terraces
In some countries terracing has been successfully practised for centuries - the Philippines, Peru and Nepal, for example. Well-built terraces are one of the most effective methods of controlling soil erosion, especially on steep slopes. However, terraces require skill and very hard work to build. Each terrace is levelled - first by levelling the sub-soil, then the top soil - and firm side supports are built, often of rock. Man-made terraces are unlikely to be an appropriate method in countries with no tradition of terrace building.

Contour ploughing
Whenever possible all land should be ploughed along the contour line - never up and down, since this simply encourages erosion. In some cultures this may be very difficult due to the pattern of land inheritance. For example the Luo people in Western Kenya inherit land in long strips running down to the river valleys, making contour ploughing extremely difficult. Soil conservation programmes may need to consider land redistribution schemes, or neighbouring farmers will have to work together.