By the end of the topic, the student should be able to;

 Static electricity- the study of gain of electric charge from an object fro, its charge at rest.

 First law of electrostatic- states that like charges repel while unlike charges attract.

 Friction method of charging- two objects are rubbed against each other to charge a neutral one.

 Earthing- flow of electrons to the ground

 Insulator- a material that does not allow electric current to pass through.

 Farad- this is the S.I unit of capacitance

 Capacitance- ability to store electric charge by a body

 Potential difference- this is work done that is needed to move a charged particle from one point to another.

 Lightning- giant electric spark that arises due to discharge of atmospheric electricity.

 Thunderstorm- this is audible sound called thunder produced by air around a radar.

When body rubbed cause the atoms to loose or gain electron which are revolve around atomic structure result causing the body to become charged. Due to that reason it tends to cause;

(b) Particles of wheat are attracted to amber.

(j) some clothes cling to the body

There are two types of charge include

Positive charge is a charge acquire when an object loose electron from its atomic structure.

 Electrons are revolve around the nuclear

 Electrons are moved from one atom to another

 Protons never move from one to another atom

The fundamental law of electrostatics which states that

Charging is the process whereby material loose or gain electrons

There are three methods as

When you rub two objects the one which his outer most shell weak bound will lose and the one have sparsely electron gain the electron. Due to that electrons shift from one object to another and tend to gin one to become negative charged and lose one become positive charged.

When charge and uncharged body contact the charge always move from 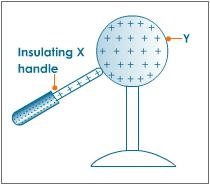 An electrophorus consists of a metal disc made of brass fitted with an insulating handle (usually an ebonite rod) resting on polythene base. It can produce numerous positive charges from a single negative charge. 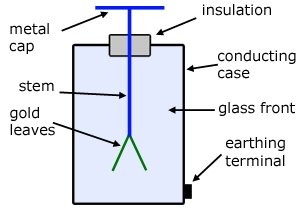 The brass cap, brass rod and the gold leaf form the conducting part of the electroscope.

When charge and uncharged body contact the charge always move from charged body to another because like charge repel and unlike charge attract. Therefore the charged one when brought to contact with metal cap result to charge metal cap and became charged.

A negatively charged rod is brought near the brass cap of the gold leaf electroscope. Induced charges are formed with brass rod acting as conductor.

Test for the sign of charge on a body

i. It used to test whether charge is positive or negative. In order to identify the charge of a body we should use a charged electroscope. Let us say the electroscope is negatively charged.

Now bring the unknown charged body X near the cap of the electroscope.

If the leaves diverge more, then X has positive charge and vice versa.

 Test for the sign of charge on a body

 Detect the presence of charge on a body

i The leave diverge/increase due to high concentration of charge

ii The leave converge/decrease due to low concentration of charge

Table of summary of charges and their effect

Identify the insulating properties of material

If the material that as placed near the cap of an electroscope is a conductor, then the metal leaf will converge and a divergence will show that the material is an insulator.

Detect the presence of charge on a body.

To detect a charge on a rod A or B bring the rod near to the metallic disc or cap of the electroscope. In either case the leaf diverges as shown in the diagram.

Conductor is substance which allow electricity to flow through it.

Examples of conductors are metals like iron, copper etc

In conductors electrons are free to move which are conduct charge from one to another.

Insulator is a material that does not allow electricity to flow through them. Examples of insulators are plastic, wood, rubber, mica, ebonite and glass. In insulators there are no free electrons for conduction.

Insulators and conductors are sometimes applied together in electric power usage.

 The ability to store electric charges is known as capacitance.

The potential difference (Voltage produced by cell/battery), V across the two capacitor plates of the capacitor is directly proportional to the charge, Q accumulating on its plates 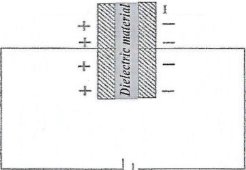 A capacitor consists of two metal plates (say plate A and plate B) arranged in parallel with a dielectric material between them.

The two plates accumulate charges when a potential difference is applied across them.

Potential difference is the work done needed to move a charged particle from a point to point.

There are different types of capacitors depending on the dielectric material used and the application.

It this paper/plastic/polyester material is used as dielectric material. It has metal foil strip as their conductor.

It this oil material is used as dielectric material.

Its contain paper material soaked in a chemical as conduct and a thin aluminium oxide is formed on the positive plane. The thinner the layer higher the capacitance

In mica a sheets of metal foil are separated by strips of mica. Mica is preferred because it is a natural mineral and splits easily into thin sheets

Conduct are semicircular plates are separated by air ad dielectric material. One set of plate is fixed and other is rotate by means of the knobs. The rotation changes the area of the plate

Capacitors can be arranged in series or in parallel to get the desired effect:

Arrangement of capacitors in series 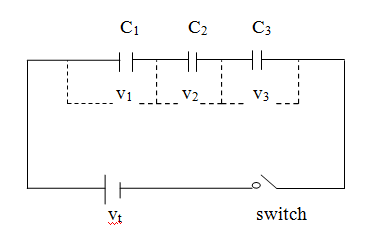 But: charge store is equal but each of capacitor

But: voltage across each capacitor is

Two capacitors of 20 µF and 25 µF are connected in (i) series, and (ii) parallel. What is the effective capacitance for (i) and (ii)?

Determine the effective capacitance obtained when two capacitors each of 10 µF are connected first in parallel and then in series.

It is required to obtain effective capacitance of 3 uF, there are two capacitors; the first is 12 µF, what will be the value of the other capacitor. State the way it will be connected to the first.

Capacitance of a parallel plate capacitor is affected by three factors, namely

Scientists and engineers have developed several experiments to prove the distribution of charge as;

Lighting is sparking on a very large scale

When wind passes across clouds, a few electrons move across the air toward positive clouds but in zigzag path called Radar

Air around the radar undergoes rapid expansion and contraction due to overheating causing high speed of air molecules. This produces an audible sound called thunder

To protect buildings from being struck by a lightning

With a thunder cloud forming or passing close to the house as depicted, the sharp point of the lightning conductor becomes inductively charged opposite to the thunder cloud. The resulting high electric field ionizes the air in the vicinity such that the charged air molecules move upwards earth rod to the ground. This action discharges the thunder cloud, thereby preventing a lightning flash occurrence. 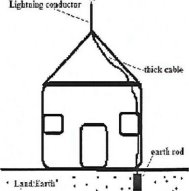  Static electricity is the study of electric charges

 Charge- are particles which has a negative or positive charge

 There are two types of charges, positive and negative charge

 The fundamental law of electrostatic states that like charges repel while unlike charges attract.

 There are three methods of charging a body, by contact, by induction or by friction.

 A gold leaf electroscope- is an instrument used to detect presence or identify the type of charge.

 Conductor is a solid substance that allows charges to pass through it.

 Insulators- materials that does not allow electricity to flow through them

 Capacitors can be arranged in series or in parallel

 Capacitor is affected by area of plates, dielectric material and distance between plates.

1. For each of the following items, choose the correct answer from among the given alternatives and write its letter in the box provided.

(i) The study of charge at rest is known as:-

(ii) The following are types of charges:

(iii) Charges acquired by glass when rubbed with silk.

(iv) The process whereby material loose or gain electrons is known as:-

(v) The following are methods of charging.

(vi) The device which produces numerous positive charges from a single negative charge is called?

(vii) The device which used to store electric charge is called?

(ix) A giant electric spark that arises due to discharge of atmospheric electricity is known as.

(x) The effective capacitance of three capacitors in series is given by:

(b) Mention types of electric charges.

4. (a) State the fundamental low of electrostatics.

(b) With the aid of diagram explain briefly how electrophorus is charged.

6. (a) What is Gold leaf electroscope?

(b) Draw a well labeled diagram of Gold leaf electroscope.

(b) Fill the table below.

(ii) What is capacitance? State its SI unit.

9. (a) With the aid of circuit diagram explain briefly the following processes.

(b) Two capacitors of 20MF and 25MF are connected in

What is the effective capacitance for (i) and (ii)?

10. (a) Write down the expression for potential difference across the capacitor with capacitance C and charge stored in it be Q.

(b) Given that the potential difference across capacity of capacitance C = 20MF is 2V. Calculate the charge stored in the capacitor.

(b) In each the circuit below, find effective capacitance and the total stores in each circuit.

12. (a) List factors affecting capacitance of a parallel plate capacitor.

(b) Explain briefly how each factor in 12 (a) above affect the capacitance of parallel plate capacitor.

(b) Explain briefly how lighting happens.

14. Complete the distribution of charge in each of the following diagram.