1.   Compute the numerical value of J and error in it for the relation 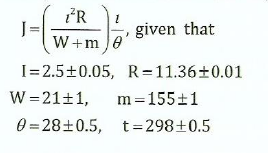 (b)  Distinguish between dimensions and unit of a physical quantity. Give one example of each.

(c)  The wavelength X of a wave associated with a particle moving with momentum p is given by the expression ?=h/p where h is a constant.

Determine the dimension of h;

(All symbols carry their usual meaning)

(b)  What are the conditions for a body to execute simple harmonic motion?

(ii)   A particle moving with simple harmonic motion has period of 8.0 seconds and amplitude of 5.0m. What is the speed of the particle when it is 3.0m from the centre of its motion and its maximum acceleration?

3.   (a) Mention the source of centripetal force in each of the following cases:

(i) An object at the end of a string is whirled in a horizontal circle;

(ii) A car travelling round a banked road;

(iii) The moon orbiting the Earth.

(b)  (i) An object of mass 4kg is whirled in a vertical circle of radius 2m with a speed of 5ms-1 Calculate the maximum and minimum tension in the string connecting the object and the centre of the circle.

(ii)   Find the angle of banking necessary for a corner of radius 80m if cars are to travel round this corner at a speed of 120km/h without relying on the frictional forces.

4.  (a) (i) State the principle of conservation of linear momentum and define the coefficient of restitution.

(i)   The energy lost by the ball when in contact with the ground.

(ii)  The coefficient of restitution of the ball and the ground.

(ii) Ice cubes of mass 5.0g at O OC are placed inside a spherical container having an outside diameter of 40cm, 2mm thick and of thermal conductivity 5.0 x 10-4 Wm IR-I . How long will it take for all the ice cubes to melt if the room temperature is 300C?

(b)  Two metal rods A and B of lengths 40cm and 80cm respectively having the same cross sectional area of 10cm2 are joined end to end. If the composition is perfectly lagged and the free end of A is fixed at 1000C while that of B is pressed to a point at O OC. Determine:

(i)       The junction temperature of the two metal rods;

(ii)      The quantity of heat that flows per minute in steady state. (Thermal Conductivities of rods A and B are 360 and 80Wm-1K-1 respectively).

(b)  A copper sphere with a black surface and radius 30mm is cooled to -730C and placed inside an enclosure at a temperature of 270C. Calculate the rate of temperature rise of the surface of the sphere. (Assume the sphere is a black body).

What is the physical meaning of the quantities A, y, ? and k?

(b)  Stationary waves are set up on a wire vibrating at a frequency of 438Hz such that the distance between adjacent nodes is 45cm.

(i)      Calculate the wavelength of the waves on the wire.

(ii)    If the tension of the vibrating wire is 85N, calculate the mass per unit length of the wire.

(iii) If the diameter of the wire is 0.28mm, calculate the density of the material of the wire

(b)  What will be the time constant if the capacitors in (a) (ii) above are connected in:

9.  (a) In Figure 1 the resistance R is varied until no current flows through the galvanometer G. 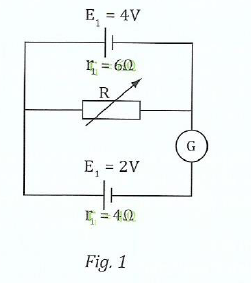 (i) What current flows through R? (ii) Calculate the value of R.

(b)   Consider the diagram in Fig. 2 and answer the questions that follow. 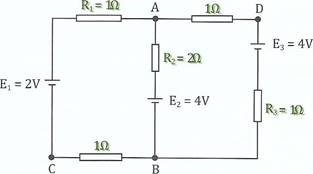 (ii)    Find the potential difference between points C and D.

11. (i) State Coulomb's law of electrostatics.

(ii)  An a-particle has a mass of 6.68 x 10 27 kg and charge of +2e. Two a-particles are situated at a distance of 1.5 x 10 Il m apart in vacuum. How does the electrostatic force compare with the gravitational attraction between them?

(b) Point charges each of +2 x 10 'C are placed at each of the three corners of a square of side 0.20m. What would be the magnitude and direction of the resultant force on another point charge of -1 x 1019 C If it is located at the:

(i) Centre of the square

(ii) Vacant corner of the square?

(ii) State de-Broglies's hypothesis and explain briefly how they were verified.

(iii) Calculate the de-Broglie wavelength from the beam of electron whose energy is 350eV.

b.(i) Determine the energy of a proton with a de-Broglie wavelength of 10-10m.

(ii)If the wavelength of a proton is twice as long as that of an electron, how much more slowly will its speed be relative to that of electron?

(ii) What are the thermal neutrons?

(iii) Determine the amount of energy in MeV released or absorbed in each of the following nuclear reactions: 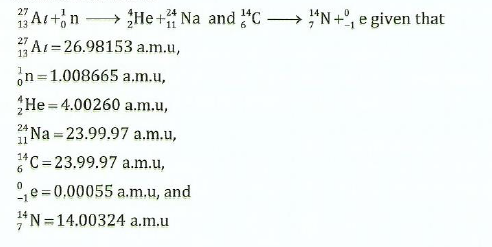 (b) (i) Define half-life as referred to radioactive element.

(ii) The half-life of Radon is 3.8 days. Determine the percentage of atoms decayed after 10 days.

14.  (a) (i) Define the following terms: Geophysics, Atmosphere, and Epicenter.

(ii) Write down brief notes on the location, composition, and importance of the following: Troposphere, Stratosphere, Mesosphere and Thermosphere.

(b) (i) Draw a sketch diagram showing the working parts of a Seismometer.

(ii) Explain how temperature varies with both altitude and depth of the Earth.

(iii) Write down two factors that govern heat flow from the interior of the Earth.