Acceleration due to gravity g -10m/s2

Assuming that  the critical velocity v depends on the density P of the liquid, its viscosity and the diameter d, of the pipe.

(i)Use the method of dimensional analysis to derive the equation of the critical velocity of the liquid in a pipe of half the diameter.

(ii) In an experiment to determine the acceleration due to gravity (g), a small ball bearing is timed while falling freely from rest through a measured vertical height. The following data were obtained: vertical height h=(600+-+1)  mm, time taken t ms. Calculate the numerical value of g from the experimental data, clearly specify the errors.

(b)   (i) Mention two uses of projectile motion.

(ii)Find the velocity and angle of projection of a particle which passes in a horizontal direction just over the top of a wall which is 12m high and 32m away.

3.  (a) What is the origin of centripetal force for:

(i) a satellite orbiting around the Earth.

(ii) an electron in the hydrogen atom?

(b)    A small mass of 0.15kg is suspended from a fixed point by a thread of a fixed length. The mass is given a push so that it moves along a circular path of radius 1.82m in a horizontal plane at a steady speed, taking 18.0s to make 10 complete revolutions. Calculate:

(i)  The speed of the small mass;  (ii) the centripetal acceleration; (iii) the tension in the thread.

(ii) The surface tension of water at 200C is 7.28 x 10-2 Nm-l . The vapour pressure of water at this temperature is 2.33 x 103 Pa . Determine the radius of smallest spherical water droplets which it can form without evaporating.

(b)  A circular ring of thin wire 3cm in radius is suspended with its plane horizontal by a thread passing through the 10cm mark of a metre rule pivoted at its centre and is balanced by 8g weight suspended at the 80cm mark. When the ring is just brought in contact with the surface of a liquid, the 8g weight has to be moved to the 90cm mark to just detach the ring from the liquid. Find the surface tension of the liquid (assume zero angle of contact).

(iii)    What value does the scale of this thermometer give for absolute zero?

(ii) Explain the observation that a piece of wire when steadily heated up appears reddish in colour before turning bluish.

(b)    (i) A glass disc of radius 5cm and uniform thickness of 2mm had one of its sides maintained at 1000C while a copper block in good thermal contact with this side was found to be 700C. The copper block weighs 0.75kg. The cooling of copper was studied over a range of temperature and the rate of cooling at 700C was found to be 16.5K/ min. Determine the thermal conductivity of glass.

7.  (a) Distinguish between stationary waves and progressive waves.

(b)    A wave is represented by the equation y =10sin 0.4Tt (60t -x) where the distance parameters are measured in metres and the time in seconds.

(i) State whether the wave is stationary or progressive.

(ii) Determine the wavelength and frequency of the wave.

(iii) What will be the phase difference between two points which are 40cm apart?

(iv) Calculate the period and amplitude of the wave.

8.(a) (i) Distinguish between magnetic flux density and magnetic induction.

(ii)      Describe using the sketch graph how a magnetic flux density varies with the axis (both inside and at the ends) of a long solenoid carrying current.

(b) A solenoid 80m long has cross-sectional area of 16cm 2 and a total of 3500 turns closely wound. If the coil is filled with air and carries a current of 3A, calculate:

(iii)    Magnetic force H at the centre of the coil.

(iv)     Magnetic induction at the end of the coil.

(v)      Magnetic field intensity at the middle of the coil.

9.    (a) (i) Define the temperature coefficient of resistance.

(ii) Briefly describe an experiment to measure temperature coefficient of a wire.

(b) A heating coil is made of a nichrome wire which will operate on a 12V supply and will have a power of 36W when immersed in water at 373K. The wire available has a cross-sectional area of 10mm2 . What length of the wire will be required?

(b)     Study carefully Figure 1 where x and y are identical junction diodes with an internal resistance of 2kO each. 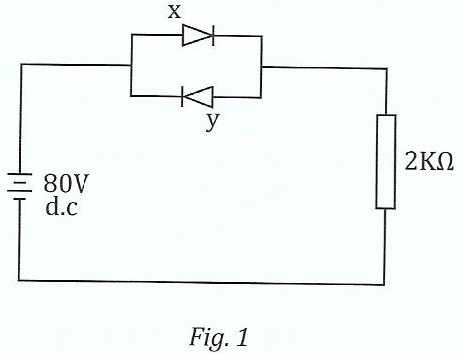 Determine the current drawn from the source when:

(i) Connections are as shown in Figure 1.

(iv)    All connections are as shown in Figure 1, but the polarities of the source are reversed.

(ii) Does the coulomb force that one charge exerts on another charge change when a third charge is brought nearby? Explain.

(b) (i)Describe the action of dielectric in a capacitor.

(ii)  The electric field intensity inside a capacitor is E. What is the work done in displacing a charge q over a closed rectangular surface?

(iii) A capacitor of 12gF is connected in series with a resistor of 0.7MQ across a 250V dc supply. Calculate the initial charging current and p.d. across the capacitor after 4.2 seconds.

(i)       A dressing table mirror becomes dusty when wiped with a dry cloth on a warm day.

(ii)      A charged metal ball comes into contact with an uncharged identical ball. [Illustrate your answer by using diagrams).

(b)     (i) Show that the unit of CR (time constant) is seconds and prove that for a discharging capacitor it is the time taken for the charge to fall by 37%.

13.      (a) (i) Without giving any experimental or theoretical detail explain how the results of Millikan's experiment led to the idea that charge comes in 'packets', the size of the smallest packet being carried by an electron.

(ii) In the form of Millikan's experiment, an oil drop was observed to fall with a constant velocity of 2.5 10-4 ms- in the absence of an electric field. When a p.d of 1000V was applied between the plates 10mm apart, the drop remained stationary between them. If the density of oil is 9 x 102 kgm-3 density of air is 1.2kgm-3 and viscosity of air is 1.8 10-5Nsm-2. Calculate the radius of the oil drop and the number of electric charges it carries.

(b)     Show that the path of an electron moving in an electric field is a parabola.

14.  (a) (i) Explain the terms earthquake, earthquake focus and epicenter.

(ii) Describe clearly how P and S waves are used to ascertain that the outer core of the Earth is in liquid form.

(ii) Why is the ionosphere an obstacle to radio astronomy?