For Both School and Private Candidates)

1. This paper consists of eight (9) questions in sections A. B and C

2. Answer five questions by choosing at least one (I) question from each section.

4. Except for diagrams that must be drawn in pencil, all writing should be in blue or black ink.

5. Cellular phones are not allowed in the examination room.

1.Besides vitamins and hormones which occur only in certain cells in small amounts, list three (3) other most common but important substances of a cell. For each substance, indicate the chemical composition and two sites for production as shown in the table below. 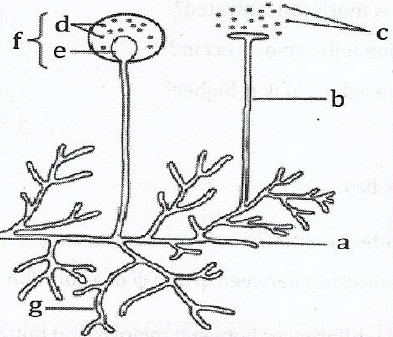 (a) Identify the organism in Figure 1 and name the structures labelled a - g.

(b) Discuss the adaptations of the organism in Figure 1 to its mode of life.

(b)Why are tactic movements very important to life and the existence of organisms?

(c)What are the differences between hormonal and nervous control in animals?

4.(a) Explain briefly the role of the following in digestion.

(b) Figure 2 shows the rate of photosynthesis in two species of plants at different intensities. 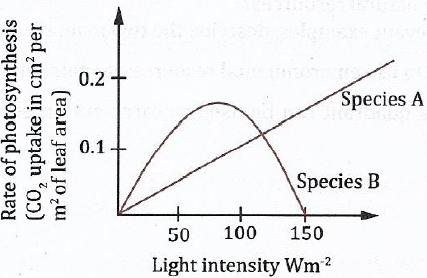 (i)Which species show the best adaptation to shady conditions? Give reasons for your answer.

(ii)Apart from light intensity, mention one other way in which light in a shady area differs from that in sunny area.

(iii)Many plant species that grow in the shade have low rates of respiration. What is the possible advantage of this?

5.(a) Explain why in cold weather humans produce more dilute urine than in hot weather.

(b)What advantages do mammals have in using urea as a nitrogenous waste product?

6.(a) State the role(s) of the following structures:

(ii)Transfer cells in a leaf

7.(a)Describe the formation of a pollen grain and embryo sac in a flowering plant.

(b)Explain how the following support the theory of organic evolution.

(b) Why is it wise to use environmental resources sustainably?

(c) Explain how a quadrant can be used to carry out an ecological study of a plant species.