2.Enter the following transactions directly into the cash book, sales ledger as well as purchases ledger. 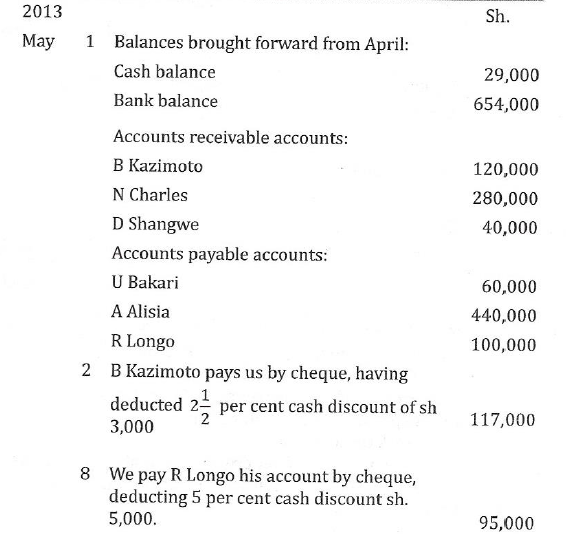 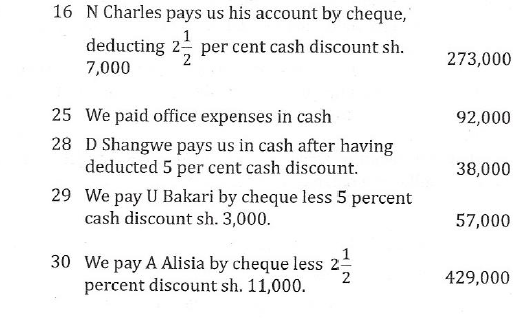 3. (a) Manenge Furniture started a business of buying and selling furniture since 1stJanuary, 2010. Quality Furniture has a warehouse in Changombe - Temeke and a shop which is situated at Nyerere Road. Manenge Furniture prepares financial statement on 31stDecember each year.

The following transactions were made during that period:

Using the information above prepare:

(b) Three of the accounts in the ledger of F Mangula indicated the following balance at 1stJanuary 2013:

Transactions during the year made by F Mangula:

Received sh. 520,000 commission, by cheque from the wholesaler.

From the information given above, prepare:

The company prepares accounts on 31stMarch annually. On 1st

Using the details above, prepare the Investment Account on 31stMarch, 2007 and 2008 valuing closing stock by using LIFO Method.

(a) Majungu Company Ltd reported a Provisional Profit of sh. 440,000 fortheyear ending 30thNovember, 2013. Consequently, the errors and omissions below were detected.

2.An invoice of sh. 15,200 received from Majuto were not entered in the purchases accounts.

4.Bad debts of sh. 1,800 which had been written off in the previous year was received but has not been recorded anywhere.

5.Repair of equipment sh. 14,000 cash were entered in equipment account.

6.Capital account credit balance of sh. 100,000 had not been brought forward from the previous accounting period.

From the information given above;

(i) Show the journal entries to correct the errors.

(b) Singanane and Company Ltd in Tabora invoiced goods to Dodoma Branch at cost plus 25%. All branch expenses are paid by Head Office, and the branch sells goods on credit and cash. Cash collected by branch has to be remitted immediately to the Head Office cash account.

During the year 2009 the following transactions were made: 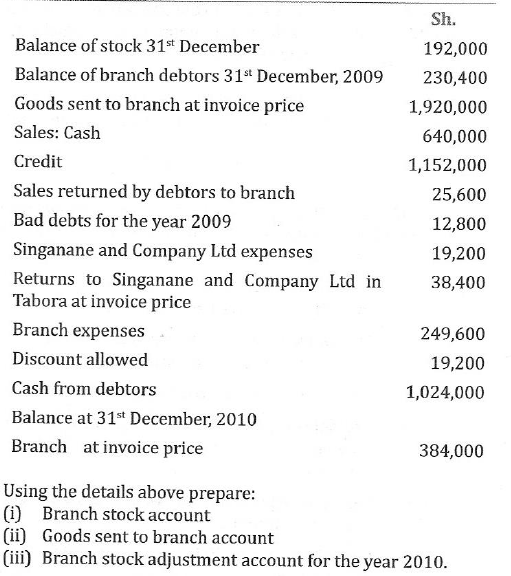 Using the details above prepare:

6.The following balances were extracted from the books of Izeize 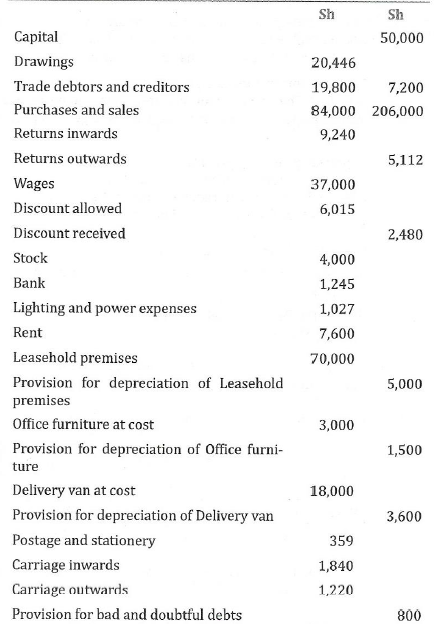 You have also been provided with the following information:

Using the information above prepare:

7.(a) A company maintains its non-current assets at cost. Depreciation provision accounts for each asset are kept.

At 31stDecember, 2013 the position was as follows:

The following additions were made during the financial year ending 31stDecember, 2013:

The rates of depreciation are:

Machinery 20 per cent and office furniture 10 per cent per annum. Using the straight line basis, depreciation was calculated on the assets in existence at the end of each financial year irrespective of the date of purchases.

Using the information above, show the asset and depreciation accounts for the year ending 31stDecember, 2013 and the Statement of Financial Position entries at that date.

(b) The following is the financial statement for one man business types of retail store: 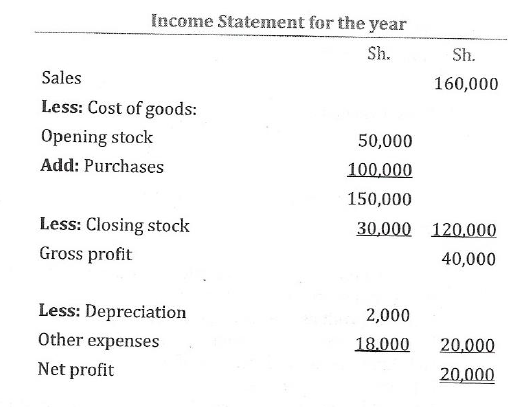 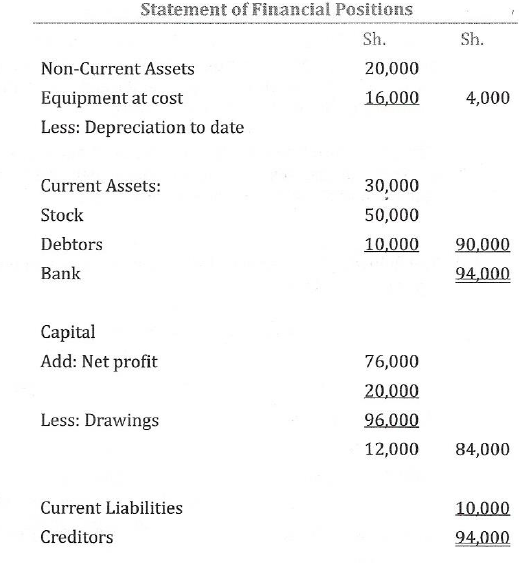 Using the information above calculate the following ratios:

(i)Gross profit as a percentage of sales

(ii)Net profit as a percentage of sales

(iii)Gross profit as a percentage of purchases

(iv)Expenses as a percentage of sales