2 (a) Pachoto Limited is a family-controlled company which operates a chain of retail outlets specializing in motor spares and accessories.

Branch stocks are purchased by a centralised purchasing function in order to obtain the best terms from suppliers. A 10 per cent handling charge is applied by head office to the cost of the purchases, and branches are expected to add 25 per cent to the resulting figure to arrive at normal selling prices. Although branch managers are authorised to reduce normal prices in special situations, the effect of such reductions must be notified to head office.

On 1stApril, 2012, a new branch was established at Mwanza. The following details have been recorded for the year ending 31stMarch, 2013:

All records in respect of branch activities are maintained at the head office, and the branch profit margin is dealt with through a branch stock adjustment account.

From the information given above:

(iii)Prepare a statement which shows the stock difference.

(iv)List four possible reasons for the stock difference revealed when a physical stocking at the Mwanza branch on 31stMarch, 2013 showed stock valued at selling prices amounting to sh. 148, 500.

(b) An account clerk extracts a trial balance in the books of M Mjaliwa which fails to agree by sh. 70,700. He places the difference on the credit side in a suspense account and then proceeds to prepare draft income statement for the year ending 31stMay, 2012 which results in a net profit of sh. 50.000. Later he attempts to find the errors which had caused the difference. Investigations reveal the following:

2.Discount received of sh. 10,800 from Dandu supplies, has been correctly entered in the cash book but has not been posted to the account of Dandu supplies.

5.Discount allowed, sh. 2,000 have been posted to the credit side of discounts received account.

6.The cost of new equipment sh. 120,000 had been debited to the repairs account.

Using the above details:

(ii)On 1stOctober, 2012 Mbawala Ltd gives its eight members the right to subscribe for one ordinary share for every eight held on 1stNovember, 2012, at a price of sh. 15 per share payable in full on application.

(iii)On 15thNovember, 2012 Komba Ltd purchased for sh. 4 per share the right of another shareholder in Mbawala Ltd to subscribe for 750 shares under the right issue.

(iv)On 30thNovember, 2012 Komba Ltd applied and paid for all the shares in Mbawala Ltd to which it was then entitled.

(viii)Komba Ltd does not make apportionments of dividend received or receivable. When part of a holding of shares is sold, it is practice of this company to calculate the cost of the shares sold as an appropriate part of the average cost of all the shares held at the date of the sale.

From the information given above, show the investment account in the books of Komba Ltd for the years ending 31stDecember, 2012 and 2013 bringing down the balance at the end of each year.

4. (a) Three of the accounts in the ledger of Goodluck indicated the following balance at 1stJanuary, 2012:

Using the above information prepare:

Transactions made by Goodluck during the year:

Using the above information prepare:

(b) Malingumu Bus Services Ltd operates between Dar es Salaam and Kampala. The firm had two buses as at 1stJanuary, 2012 as shown below:

Depreciation is charged at 20% per annum on cost.

During the year ending 31stDecember, 2012, the following transactions took place:

Malingumu Bus Services Ltd provides depreciation from the day of purchases to the date of disposal and makes its accounts to 31stDecember each year.

From the information given above, show the entries for the year ending 31stDecember, 2012: (i) Buses account

5.Identify the accounts affected by the following transaction and show the action to be taken in recording the accounts in the double entry system.

(iii)Owner withdraws cash from business for personal use

(ix)Some of the goods bought from G. Opio were returned back to him for default reasons.

(x)S. Kaijage returned to us some of the goods bought, as they were in excess of his order.

6.The following balances were extracted from the books of Machungwa Machachu, a sole trader for the year ending 30thSeptember, 2012. 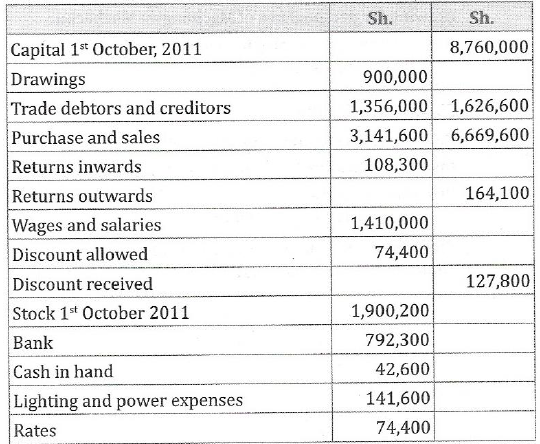 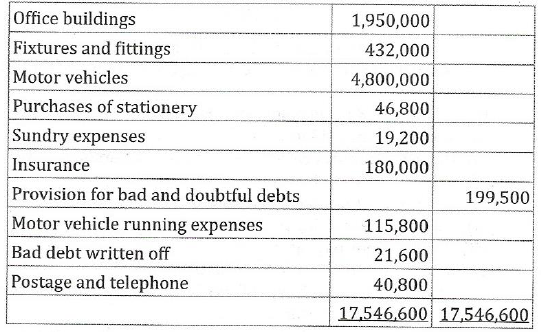 You have also been provided with the following information:

2.One-quarter of lighting and power expenses is to be treated as drawing for personal use of Machungwa Machachu.

3.Depreciation is to be provided for as follows: 10% on fixture and fittings

20% on motor vehicles. 5%on office buildings.

6.Provision for bad and doubtful debts at the end of the year is to be equal to 10% of trade debtors.

Using the above information, prepare Income Statements for the year ending 30thSeptember, 2012 as well as Statement of Financial Position as on that date.

7.(a) On1stJanuary, 2014, S Kanjanja had the following assets and liabilities: 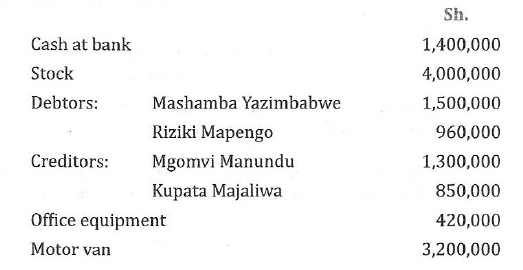 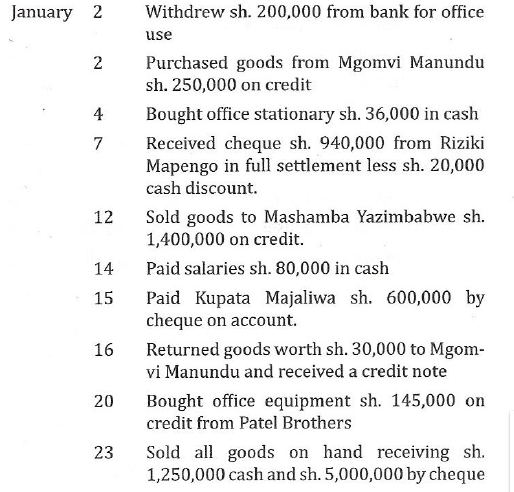 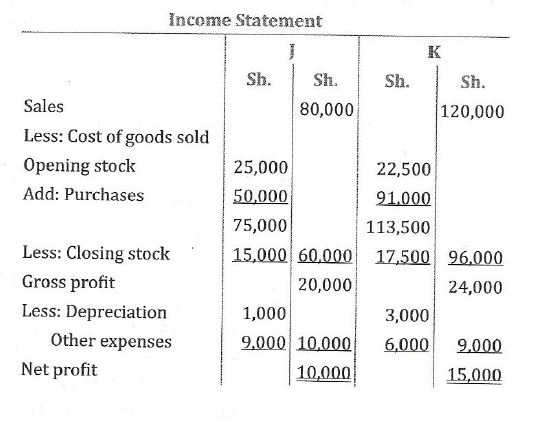 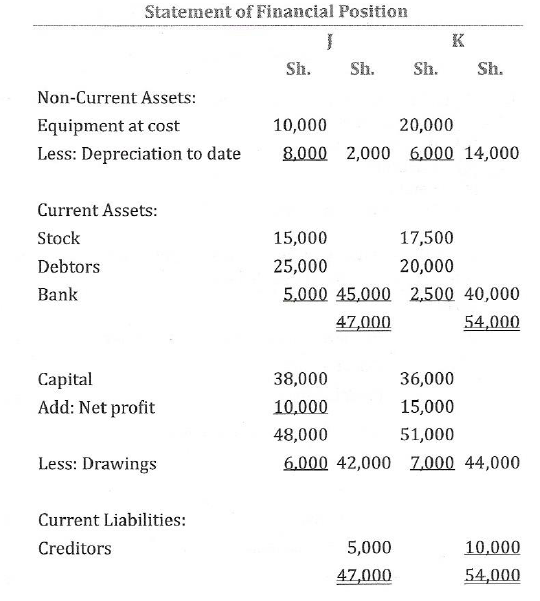 Using the above information, calculate the following ratios:

(i)Gross profit as a percentage of sales

(ii)Net profit as a percentage of sales

(iii)Gross profit as a percentage of purchases

(iv)Expenses as a percentage of sales