2.The following Trial Balance was extracted from the books of Maisha Mafupi, a trader as at 31stDecember, 1994. 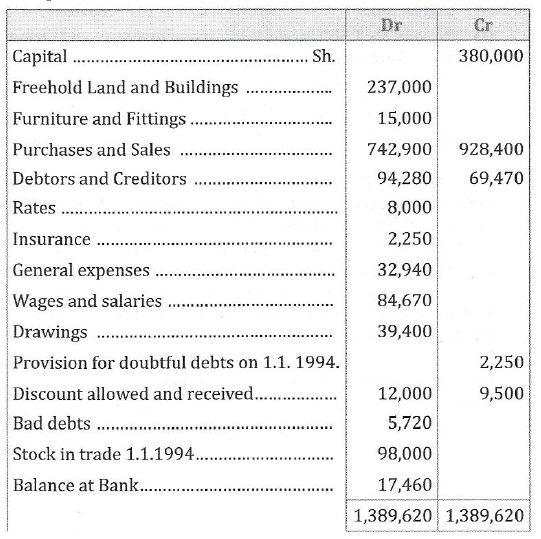 (e) On 1stJanuary, 1994 Maisha Mafupi sold his private car for Sh. 15,000 and used Sh. 10,000 of that amount to buy a delivery car for use in the business. On the same date he took from the business goods costing Sh. 1,500 for his own use. No entries have been made in the books of the firm recording these

From the above information, you are required to prepare the Income Statement and the Balance Sheet as at 31stDecember, 1994.

You are required to prepare the investment Account for the period ending on June, 2001 (Assume the OR company uses FIFO method).

4.The following is a summary of the Cash Book of Tendawema Social Club. 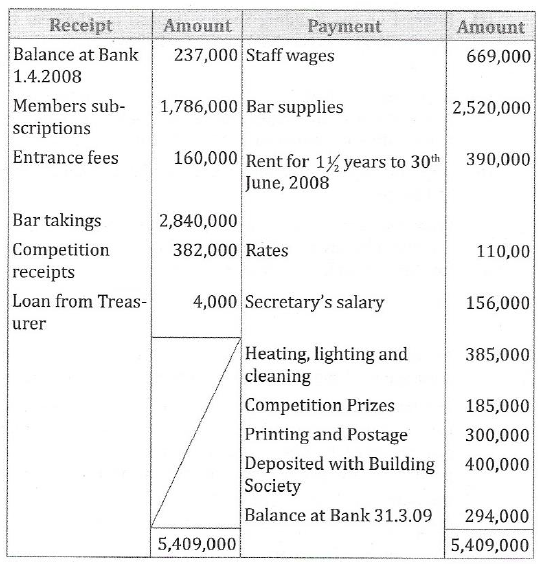 (c)It appeared from the register of members that subscriptions unpaid at 31stMarch, 2009 amount to Sh. 50,000.

(e)The secretary is to be allowed Sh. 25,000 per annum for the use of his own motor car in connection with Club affairs.

(h)Write off depreciation on furniture and equipment at the rate of 10% per annum.

From the above information, you are required to prepare Bar Trading account as well as Income and Expenditure account for the year ended 31stMarch, 2009.

5. Machinga Ltd, whose head office is at Changarawe, operates a branch at Uyole. All goods are purchased by the head office and invoiced to and sold by the branch at cost plus 33% per cent. Other than sales ledger kept at Uyole, all transactions are recorded in the books at Changarawe. The following particulars are given of the transactions at the branch during the year ended 28thFebruary, 2007. 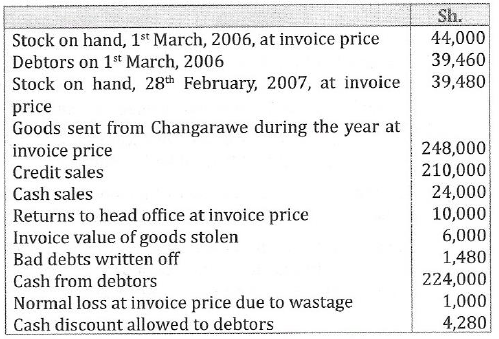 Using the details above, prepare the Branch Stock Account and Branch Total Debtors Account for the year ended 28thFebruary, 2007 as they would appear in the head office books.

(b) Chihoko Company uses accrual basis of accounting. The Company owns real estate that it rents to various lessees. Rent collected in cash during year five amounted to Sh. 543,000. The amounts of rent receivable and unearned rent revenue on two successive balance sheet dates were as follows:

The Company advertises its goods through T BC, Radio One and Daily Newspapers, some of the advertising costs are paid in advance and some is paid on receipt of invoices. Advertising expenses on the accrual basis of accounting for year five was Sh. 321,000. The amounts of prepaid and accrued advertising expenses at the beginning and at the end of year 5 were as follows

You are required to compute the amount of:

(i)Rent revenue that should appear in the profit and loss account for the year five.

6.(a) Green Rental Car Hire completed its first year of operations on December 31st, 2001. Because this is the end of the annual accounting period, the company book keeper prepared the following provisional income statement. 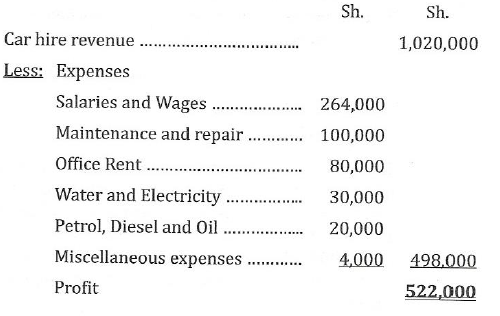 From the above information you are required to prepare:

(i)Journal entries for the adjustment

(b) Pass necessary journal entries for adjustment and closing entries for the following adjustments as at 31st March, 2001 and narrate for the transactions.

7.A business started on 1stJanuary, 2007 and its financial year end is 31stDecember. A table of debtors, the bad debts written off and the estimated doubtful debts at the rate of 2% of debtors at the end of each year has shown below:

From the above information, you are required to:

(i)Ascertain the amount for estimated doubtful debts at the end of each year.

(b) MwacheniMwenyewe extracted a trial balance as at 31stDecember, 2010. He was unable to balance it, but as urgently needed his accounts for tax purposes; he opened a suspense account and entered Sh. 7,050 debit balance in it.

In the next year he found the following errors listed:

From the above information, you are required to prepare:

(i) The journal entries needed to correct the errors.