1. This paper consists of sections A and B with a total of ten (10) questions.;

;4. Mathematical tables and non-programmable calculators may be used.;

5. Cellular phones and any unauthorised materials are not allowed in the examination room.;

7.;;For calculations, you may use the following

(ii);;;Shortcomings of the Bohr's atomic model

(b);;;;;;An electromagnetic radiation of wavelength 2420 A is sufficient to ionize the sodium atom. Calculate the ionization energy of sodium atom in kJmol-1.

(c);;;;;;Calculate the wave number of the longest wavelength transition in Balmer series of atomic hydrogen.

(i);;;;;;;;List all possible orbitals present in this quantum energy.

(ii);;;;;;;Write possible values of ml and ms for this quantum number.

(ii);;;;;;;Write the convention symbols for the two isotopes of element X.

3.;;;(a) Give reasons for the following observations

(i);;;;;Both sodium and hydrogen occur in group IA of the periodic table, yet the melting point of sodium chloride is 8000C while that of HCI is - 1140C.

(ii);;;;;Sodium chloride is soluble in water but not in benzene.

(iii);;;;;Although both oxygen and sulphur are in the same group of the periodic table, the hydride of oxygen (H20) is a liquid but he hydride of sulphur (H2S) is a gas at room temperature.

(b) (i) Study the following compounds: hydrogen sulphide (H2S), ammonia (NH3), hydrogen fluoride (HF), chloroform (CHC13) and ethanoic acid (CH3COOH). With reasons, briefly describe the compounds which contain and those which do not contain hydrogen bond.

(ii) Briefly explain why dimethyl ether is more volatile than ethanol although their molecular weights are the same.

4.;;;(a) State why was it necessary to modify the ideal gas equation and show how the modified equation looks like. Define all symbols in the equation.

(b);;;Briefly explain why beyond certain temperatures gases cannot be liquefied

5.;;;;;(a) Define the following terms with reference to gases:

(b);;;;;From ideal gas equation, derive the relationship between density of a gas in grams per dm;3, the gas pressure in atmospheres, the temperature (T) in kelvin, the relative molecular mass of a gas (Mr) and the gas constant R.

6.;;;(a) Give two differences between osmosis and diffusion.

(b);;;;;When 15g of glucose (C6H1206) was dissolved in 50g of a certain solvent with a relative molecular mass of 180g, the freezing point was depressed by 8.0;0;C. Using these data, calculate the freezing point depression constants, for the solvent.

7. (a) Give a brief molecular explanation of positive and negative deviations from Rapult's law for non-ideal binary solutions.

(c);;;;;Benzene (C6H6) and toluene (C6H5CH3) form an ideal solution. At 333K, the vapour pressure of pure benzene is 53.3kPa while that of pure toluene is 26.7kPa. If a solution is prepared by mixing two moles benzene and three moles of toluene;

(i);;;;;;Find the partial pressure of each component in the vapour phase in equilibrium with this solution at 333.

(ii);;;Calculate the total vapour pressure of the solution.

(iii);Explain which substance will be collected from the top of the distillation column, if a mixture of benzene and toluene is distilled.

(i) Explain why the boiling point of ethanol was raised. (ii) Calculate the molar boiling point, Kb for ethanol.

9.;;;(a) (i) Briefly explain the dynamic nature of equilibrium reaction.

(ii) Use hydrogen (H2) and iodine (12) gases which produce hydrogen iodide (HI) gas to illustrate the point mentioned in (a)(i).

;help maximize the yield of ammonia gas in the Haber process.

(ii) The equation for production of ammonia gas is as follows:

From the given equation, explain how maximum yield of ammonia can be achieved.

(b);;;;;;1.5g of ammonium nitrate (NH N03) was added to 35.0g of water in a plastic beaker and stirred until the salt dissolved. The temperature of the solution dropped from 22.70C to 19.40C. Basing on the given information respond to the following equations:

11.;;Briefly explain the following terms and give an example of family of organic compounds in each case:

(b);;;;;;10cm3;of a gaseous hydrocarbon Q required 45cm3;of oxygen for complete combustion. Q reacts with I mole of bromine gas to form a brominated compound of relative molecular mass of 200.02 which contains 79.2% bromine.

(b);;;;;;Write the structural formulae of the following:

(C) Identify a simple chemical test that can be used to distinguish between the following compounds: (i) I-butyne and 2-butyne (ii) Butane and butene.

(ii) Give reason why the chloromethane obtained in (a)(i) is not pure.

(b);;;;;;Bromoalkanes may react with alcohol potassium hydroxide solution to form alkenes. Basing on this statement answer the following questions:

(ii);;;;;;Write an equation for the reaction of I-bromobutane with alcohol potassium hydroxide. Show all mechanisms involved.

(iii);;;;Draw the structural formula of the alkene obtained by reaction between 2-bromobutane and alcoholic potassium hydroxide.

14.;;(a) Briefly explain the following: (i) C-C bonds are all real and intermediate in length between a single and a double bond in benzene

;(ii) Dry ether is necessary in the preparation and use of the Grignard reagent. 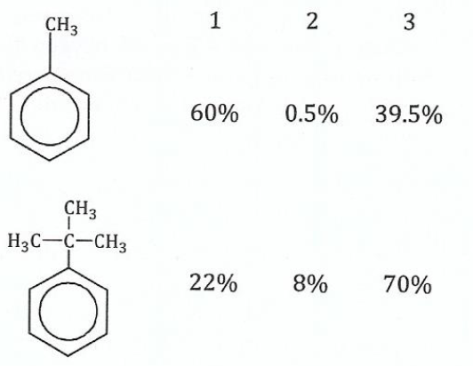 Study the isomers and explain the observed different product ratio.