1. This paper consists of sections A and B with a total of ten (10) questions.;

;4. Mathematical tables and non-programmable calculators may be used.;

5. Cellular phones and any unauthorised materials are not allowed in the examination room.;

7.;;For calculations, you may use the following

(c) The following figure shows the mass spectrum of lead. The highest peaks and the mass numbers of the isotopes are shown. Calculate the average atomic mass of lead. 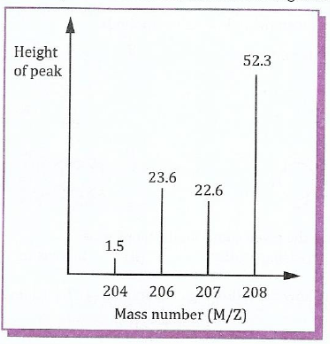 2.;;(a) Lyman discovered a series of spectral lines for hydrogen in the ultra-violet region of the electromagnetic spectrum. What value must n1 have for this series? Give a reason for your answer.

(c) An experimental iodine laser emits light of wavelength 1.315gm. Calculate the frequency of this light and the energy per photon.

3.;;Predict the hybridization of the following:

(b);;;;;;Arrange the following substances in order of increasing melting points:;

(c) Use VSEPR theory to predict the molecular geometry of the species PCL, NH3;and PC15.

4.;;State two characteristics of compounds which are suitable for steam distillation.

(b);;;;;;Two has burettes, one containing 10cm3;of sulphur dioxide (S02) and other containing 30cm3;of hydrogen sulphide (H2S) both at I atmosphere and at OOC are initially separated by a stop cork. The stop cork is then opened and the two gases are allowed to mix according to the reaction SO2(g);+ 2H2S(S)→3S(s);+ 2H20(l)

Calculate the final pressure (in atmospheres) after the reaction has ended and the apparatus has regained its temperature of OOC. (Assume liquid water does not exert pressure).

6.;;Distinguish between the following:

(ii) Calculate the KP value for the equilibrium 2NOC12(g);

;2NH3(g);derive KP and Kc relationship if the pressure of the mixture is PT;and volume is VT.

(i);;;;Write electronic configuration of each element.

(ii);;;;;What type of ion each element is expected to form?

(iii);;;;In which group and period would each element be placed?

(b);;;;;Study the following hypothetical elements in a periodic table and then answer questions that follow.

Using letters indicated in the table, identify the following:

(i);;;;;The element which is the most electronegative.

(ii);;;;;A pair of elements that is likely to form the strongest electrovalent bond.

(iii);;;Two elements which are likely to have strongest reducing properties.;

(iv);;;Two elements which form neither negative nor positive ions.

8.;;(a) With reference to Modern periodic table, briefly explain the following

(b);;;;;Explain how the hydrides of period 3 elements react with water.

9.;;(a) (i) What is the difference between the first and the second ionization energies of electron?

(b);;;;;One mole of PCI5 was introduced into a closed vessel ata certain temperature. By the time equilibrium was established, it was found that PC15 was 10% dissociated and the total pressure in the vessel was 4 atmospheres. Calculate:

(i);;;;;;;KP value at the temperature of the experiment

11. (a) Complete the following equations for reactions of the alkanes:

(c);;;Write equations for the preparation of alkenes from the following starting materials, indicate the conditions required and if there is more than one product, indicate which one is major.

Write the Structure of the functional groups of the following sets of compounds: 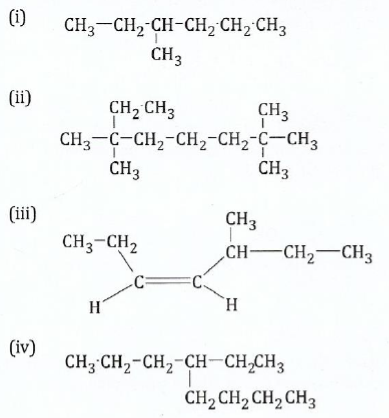 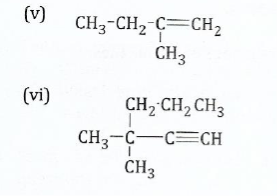 (b) Give the IUPAC name of the following compounds

13.;;;;;With support of chemical reactions show how the following compounds can be prepared from ethanol as source of carbon atoms:;

14.;;;;;(a) Write the structure of the major products for the reaction of gaseous hydrogen bromide with the following:

;(b);;;;;;;Explain how you can distinguish the following: 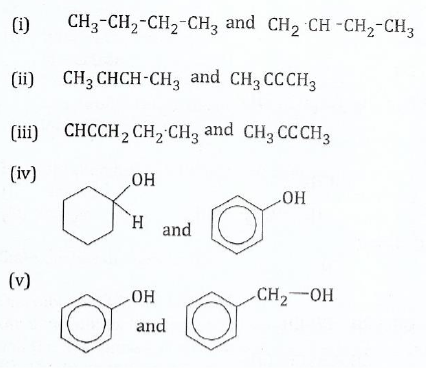