7.For calculations, you may use the following

(b)A radioactive isotope of polonium 2%Po decays according to the following scheme:

(i)Deduce the mass numbers and atomic numbers of X, Y and Z.

(ii)What is the relationship between the element PO and Z?

2.What is the meaning of the following quantum numbers?

(b)List all possible values oft and m when n is 3.

(c)When an electron jumps from a certain higher energy level E , to its ground state El, green light in the Balmer series is emitted. If the energy Released during this

(i)Wavelength of the green light

3.What do you understand by the following types of bonds?

(b)18g of compound X distribute themselves between water and equal volume of an immiscible solvent Y so that 2g of X are in water. Calculate to the nearest integer, the percentage of X left in water if 1000cm3of water containing lg of X are extracted by one litre of Y.

In the preparation of ethylethanoate shown in the equation below, concentrated H2S04is often added to the mixture.

(i)State two (2) functions of concentrated H2S04in the production of the compound.

(ii)What will be the effect of adding NaOH(aq) instead of conc. H2S04 in the production of compound?

(ii) What mass of ethylethanoate should be present in the equilibrium mixture formed under the same experimental conditions as 6(b)(i) above if 0.30 moles of ethanol were heated with 0.20 moles of ethanoic acid in 1.0dm3closed vessel?

7. (a) Explain why the first element in each group of the main periodic table shows properties which are not exhibited by other group elements.

(b)Account for the following observations and give chemical reactions whenever

(iv)Water is covalent compound but has a high boiling point.

(v)Hydrogen gas is evolved when magnesium metal is placed in a beaker containing ammonium chloride.

(c)Justify the periodicity of properties of elements in the periodic table based on electronic configuration.

8.(a)Account for the following:

(i) Zinc and iron are both d-block elements but iron can be magnetized while zinc cannot.

(iii)Give examples of compounds in which manganese exhibits different oxidation state. (Give example in each case.)

(b) (i) What is effective nuclear charge?

10.(a)Account for the uniqueness of hydrogen in the periodic table.

(b)(i) List all the isotopes of hydrogen and explain how they differ from one another.

(ii)Give the products of the following reactions: 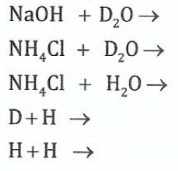 © Distinguish between ortho and para hydrogen.

11.(a) Name the following compounds according to the IUPAC system:

(b)Compound X containing a carbon-carbon double bond would react with the following reagents:

(c)Indicate a chemical test which may be used to distinguish the members of each of the following pairs. Indicate of the pair that gives the positive or greater reaction.

(b)Arrange the following compounds in order of increasing easiness in substitution of the halogen atom by an electrophile. Give reasons for your arrangement

13.(a) Write the structural formulae of the following compounds:

(b)Give the names and structures of dimethyl benzenes.

(c)Explain with the help of chemical equations which dimethyl benzene in 131b) above will yield:

14.Give the organic product(s) of each of the following reactions: 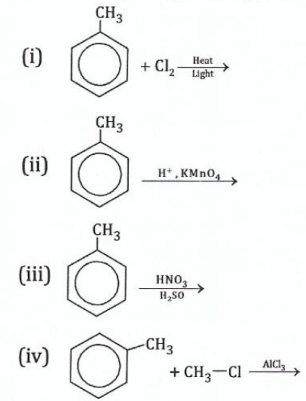 (b)Describe the chemical test you would carry out to distinguish the following compounds: