7.For calculations, you may use the following

1.(a) Define the following:

(c)X is a radioactive element which undergoes transition as follows:

(ii)What are the four (4) properties described by quantum numbers?

(c)Why do ionization energies increase from left to right across the periodic table?

3.(a) Define the following giving one example in each case:

(b) (i) Describe the conditions necessary for the formation of hydrogen bond. How does the described bond differ from other intermolecular forces?

(ii)With the help of diagrams, show the type of hybridization, geometry and bond angle found in methane, ethene and ethylene molecules.

(iii)By using diagrams, explain why NH3 and CH4 have tetrahedral geometrical structures but the bond angle in CH4 which is 109.50is greater than in NH

(c)Dinitrogen tetraoxide in its liquid state was used as one of the fuels on the lunar Lander expeditions for a NASA space vessel. In the gas phase it decomposes to gaseous nitrogen dioxide as shown in the following equation:

(i)Write the equilibrium expression in terms of the concentration.

(b)List the following in the order of increasing boiling points: 0.03M hexane, 0.03M

(c)(i) The melting point of camphor is 176.50C. When0.125g of sulphur is finely ground and mixed with 3.62g of camphor, the resultant mixture melts at 171.40C. What is the molecular weight of sulphur in camphor?

6.(a) Give a brief explanation of the following terms:

(b)One eighth of a mole of a certain hydrated salt contains 112g of water. Calculate the number of molecules of water of crystallization of the salt.

(c)The atomic radius of sodium is cm and the molar volume of sodium is 23.68cm3. If 68.52% of this volume is the actual volume occupied by sodium atom, calculate the Avogadro's constant. (Volume of one sodium atom =

7.(a) The empirical formula of nicotine, a poisonous compound found in tobacco is C5H7N. Its molecular weight is 162. What is the molecular formula of the compound?

(b)How many grams of oxygen are required to burn 57.0g of octane?

(c)What is the arrangement of electrons in62}Co which is used in cancer therapy?

(d)One mechanism for the removal of excess heat generated by metabolic processes in the body is evaporation of the water in sweat. In a hot, dry climate as much as 1.5 litres per day may be lost by one person. Calculate the amount of heat required to evaporate this water at T = 460C. (AH vap = 43.02kJmo F1at 460C)

8.In what ways does the chemistry of hydrogen resemble that of:

(c)Describe two industrial methods for the preparation of hydrogen.

9.State the allotropic properties of carbon.

(c) Explain why the acidity of the hydrides of group seven elements increase down the group.

(b) Commercially available concentrated hydrochloric acid is an aqueous solution containing 38% HCI acid by mass and has a specific gravity of 1.18g/cm3.

11.Write the IUPAC names for the following compounds: 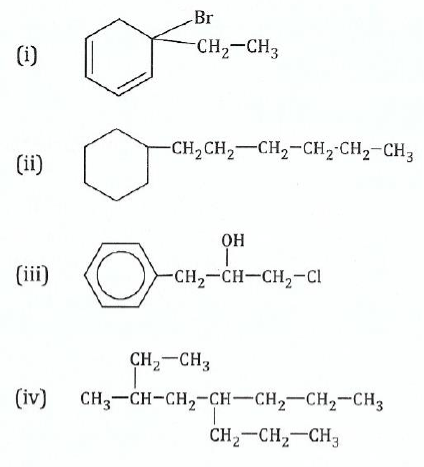 (b)Write the structural formulae of the following compounds:

(c)Write the equations for suitable laboratory methods of preparing the following alkanes starting from one organic compound that has less than four carbon atoms only.

12.(i) Write the structural isomers of molecular formula C4H9Cl.

(ii) Explain by using chemical equations the chemical test which can be used to distinguish the isomers in 12 (a) (i).

(b)Write the equations for the following reactions:

(i)Benzene and chloromethylbenzene (benzyl chloride), in the presence of AIC13. 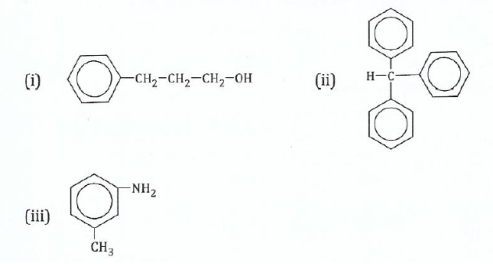 13.Write chemical equations showing how you would prepare the following compounds:

14.A student gave the following names for various alkanes:

The names indicate the structural formulae of the alkanes but do not strictly follow the IUPAC rules of nomenclature.

Draw the structural formulae suggested by the incorrect names and give the correct IUPAC name for each compound.

(b) Write equations to show how you could prepare the following compounds:

(i) Ethyl ethanoate from chloroethane

(c) By considering the typical functional group reactions, suggest the products of the

and the following reagents: