THE UNITED REPUBLIC OF TANZANIA NATIONAL EXAMINATIONS COUNCIL OF TANZANIA

Answer all questions in this section

1. For each of the items (i) – (x), choose the correct answer among the given alternatives and write its letter beside the item number in the answer booklet provided

(ii) Which statement explains the basis of heliocentric theory?

(iii) Which among the following is a reason for the sky to appear blue while being observed from the earth?

(iv) The suspended magnetic needle always comes to rest with its axis in a vertical plane called?

(v) The correct arrangement of metals in ascending order of their linear expansivities is?

(vi) The loudness of a note produced by a vibrating object depends on?

(viii) The correct statement about radio waves is that:-

(ix) What is the function of cathode in x – ray tube?

(x) Which of the following circuit elements has ability to produce gain as used in electronics?

2. Match the items in List A with responses in List B by writing the letter of the correct response beside the item number in the answer booklet provided.

3. For each of the items (i) –(x), fill in the blank spaces by writing the correct answer in the answer booklet provided.

(ii) How the moment of force can be increased considerably in practical life? Give two examples.

(b) (i) List two factors that affect stability of a body

(ii) Briefly explain why the handle of a door is near its outside edge?

(ii) A uniform rod AB of mass 6.0 g is balanced horizontally about a knife edge at a distance of 3cm from end A w here a mass of 8.0 g is hanging. Find the length of the rod.

6. (a) (i) Distinguish between light spectrum and dispersion of light.

(ii) Briefly describe how a light ray passes through an equilateral glass prism.

(b) Study Figure 1 which represents three primary colours combines together and answer the questions that follow. 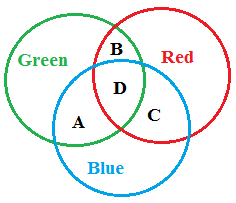 (b) Briefly explain on the following observations:

(c) (i) Define latent heat of fusion of a substance

. Calculate the mass of ice formed.

8. (a) (i) Distinguish between primary and secondary cells, giving one example of each.

(b) (i) Explain why lead – acid accumulators are used in car batteries rather than dry cells?

(c) (i) List two devices that are important when checking electrical faults in domestic appliances.

(ii) How are the bodies in the solar system kept in normal positions?

(c) (i) Which planet is often called “Morning star”?

(ii) Name three instruments which are used to detect radiation from radioactive source.

(b) Figure 2 shows the deflection of radiations from a radioactive element by an electric field.

(c) (i) What are radioisotopes?

(ii) How can an a.c dynamo be converted to a d.c dynamo.

(b) (i) Briefly explain why an e.m.f is induced in the coil as it rotates.

(c) Explain the function of each of the following features of a simple electric motor.