031/1 PHYSICS 1 (For Both School and Private Candidates)

1. For each of the items (i)-(x), choose the correct answer among the given alternatives and write its letter beside the item number in the answer booklet provided.

(i) What physical phenomenon is observed when a tea bag is dipped into a cup containing hot water?

(ii) When a gas is compressed at constant temperature, the gas molecules

(iv) When illuminated by a certain lamp, the shadow of a table-tennis ball on a white screen is uniformly dark. This is because the lamp used is

(v) In a black and white television, the image is formed on the screen by:

(vi) A green card with red flowers when viewed in a red light will appear:

(vii) Figure 1 shows a pattern of waves in a ripple tank traveling from part X to part Y across a plane section Z. 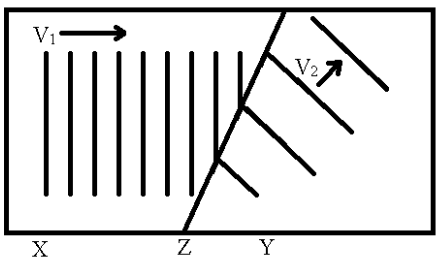 What observation can be made from Figure 1?

(ix) In a cloud chamber, straight-line trails of vapour are produced by a source emitting:

(x) Which of the following is the correct weight of a body of mass 48 g when placed on the moon surface?

2. Match the times in List A with reponses in List B by writing the letter of the correct response beside the item number in the answer booklet provided.

3. For each of the items (i)-(x), fill in the blank spaces by writing the correct answer in the answer booklet provided.

4. (a) Give two practical examples where impulse and momentum play an important role.

(ii) Sand falls gently at a constant rate of 50 g/s onto a horizontal belt moving steadily at 40 cm/s. Find the force in newtons exerted by the sand on the belt. State any assumptions made in your calculation.

(b) Briefly give reasons for the following:

(i) the fundamental frequency may alter during the day.

(ii) notes of the same pitch played on a violin and a flute sound different.

(c) The frequency obtained from a plucked string is 400 Hz when the tension is 2 N. Calculate:

(i) the frequency when the tension is increased to 8 N.

(ii) the tension needed to produce a note of frequency of 600 Hz.

6. (a) State the parallelogram law of forces.

(b) (i) Distinguish between absolute velocity and relative velocity.

(ii) Wind is blowing 30° west of north at 20 km/hour. A bird is flying in the wind and its velocity relative to the ground is 90 km/hour at 75° west of north. Calculate the velocity and direction of the bird.

(c) (i) Define the coefficient of dynamic friction.

(ii) A body of mass 40 kg is placed in a straight track sloping at an angle of 45° to the horizontal. If the body is held from slipping by friction, calculate the normal reaction and the force of friction.

(ii) Mention three points to be considered when drawing a ray diagram to show the formation of images on a concave mirror.

(b)(i)Briefly explain why part of the road ahead of a person apparently looks as if it has a pool of water on a sunny day?

(c) Paraffin has a greater refractive index than water. What can you say about the

(i) relative velocity of light in paraffin and in water?

(ii) path of a ray of light when passing from water into a layer of paraffin?

(ii) Give two effects of beta (β) particle on the nucleus of an atom.

(b) (i)Define the term isotope of an element.

(c) (i)How would you test whether a car battery needs recharging? (Give three points).

(ii) Two resistors each of 5 Ω Are connected in parallel across the same battery of e.m.f. 5 V and negligible internal resistance. If the battery is fully charged and then discharged within 20 hours, calculate the storage capacity of the battery.

(c) (i) List down two disadvantages of non-sustainable energy sources.

(ii) Give one peculiar property of a diode as a rectifier.

(b) Briefly explain the function of each of the following apparatus:

(c) Figure 2 shows a section of a cathode-ray oscilloscope.

What changes should be done in order to produce the following on the screen:

(i) a brighter trace

11. (a) (i)Use the kinetic theory to explain why solids expand when heated.

(ii)Mention two experiments which can be done in the laboratory to verify thermal expansion of solids.

(b) Explain how each of the following works:

(i) a bimetallic thermostat.

(ii) Describe the structure of an induction coil and briefly explain its mode of action.