1. For each of the items (i) – (x), choose the correct answer from the given alternatives and write its letter beside the item number in the answer booklet provided.

(i)  Which one of the following sets of laboratory apparatus are used for measure volume?

(ii)  The empirical formula of certain compound in CH3. Its molar mass is 30 g. What will be its molecular formular?

(iii)  In order to produce the greatest amount of hydrogen in a short time, one gram of magnesium ribbon should react with

(v)  Which of the following substances represent a group of acidic oxides?

(vi)  What will the molarity of a solution which contains 26.5 g of anhydrous sodium carbonate in 5 dm3 of solution?

(vii)  The Brownian movement is taken to be the evidence of the:

(viii)  One off the isotopes of an element X has an atomic number Z and a mass number A. What is the number of neutrons contained in the nucleus of the element X?

(ix)  C2H4Cl can be represented in different structures which are called

(x)  _____ is the general term used to explain a mixture of different metals.

2. Match the items in List A with the responses in List B by writing the letter of the correct response beside the item number in the answer booklet provided.

Answer all questions in section.

3. (a) With the help of chemical equation, what will be observed when ammonia reacts with

(b) It is not advisable to sleep inside a house which is not well ventilated with a burning wooden charcoal. Give a reason for that and write the chemical equation to represent your answer.

4. Study the following part of the periodic table and then answer the questions that follow. Note: The letters used are not scientific symbols for the elements concerned.

(a) Identify and write down the electronic configuration for the elements K, N, P and L.

5.  (a) A solution of sodium hydroxide was electrolysed using platinum electrodes. Write the reactions which took place at the electrodes and give a reason why the solution becomes alkaline.

(b) Electric current was passed through a solution of sodium hydroxide using platinum electrodes. Draw a labelled electrolytic cell for this electrolysis. Indicate the directions of the movement of ions.

6. (a) Give the name of the process of making coke from coal. Write one characteristic which make coke a better fuel than coal.

(ii) Giving example, explain why preparation of metallic oxides by direct method is not intensively used.

7. (a) (i) People suffering from heart burn usually use wood ashes for relief. Mention characteristic which makes the ashes to be used for heart burn relief.

(ii)Give four compounds found in laboratories which show the same characteristics as ashes.

(b) How many molecules are there in 11.2 litres of carbon dioxide at STP?

8. (a) (i) Name the products formed when nitrates of potassium and zinc decompose by heat.

(ii) Suggest why the nitrates of zinc and potassium behave differently on heating.

9. Two experiments were carried out using the same mass of magnesium ribbon and the same volume of acids of the same concentration. The acids were 1M hydrochloric acid and 1M ethanoic acid. The results were as shown in the following figure: 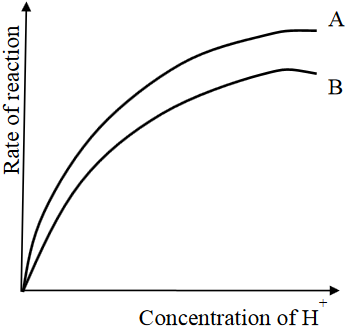 (a) If the experiments were conducted within the same time, is there a difference in volumes of hydrogen gas collected at the same room temperature and pressure? Give reasons for your answer.

(b) When same mass, volume and concentration of powdered magnesium and ethanoic acid are allowed to react, new graph is formed. Giving reason (s), suggest the position of that graph whether will be above, between or below graphs A and B.

10. (a) (i) Name three gases which should not be produced in order to prevent the destruction of ozone layer.

(b) Lack of safe water for domestic and industrial uses is a serious problem in most of Tanzanian towns. The major cause of this problem is pollution in the water sources. Slate three methods that could make water from a pond or a well be safe for drinking.

(b) The preparation of chlorine gas can be represented by the following equation: MnO2 + 4HCl ? MnCl2 + 2H2O + Cl2. Calculate the number of moles of HCl which are needed to react with 20 g of MnO2 and list two main chemical properties of chlorine gas.

12. Consider a four carbon hydrocarbon (C4Hn), where n is an integer. Give the name of homologous series, molecular formula and structural formula for different isomers of the compound formed by each homologous. In each case indicate the causes of isomerism.