l. This paper consists of sections A, B, C and D with a total of ten (10) questions.

2. Answer all questions in the spaces provided.

4.All writings must be in black or blue ink.

5.All communication devices and any unauthorised materials are not allowed in the assessment room.

6.Write your Assessment Number at the top right comer of every page.

Read the following passage carefully and answer the questions that follow.

A debate is a public meeting in which speeches and arguments are made on a particular issue or topic. The debate aims at making a discussion on a particular topic. The topic for debate is known as the motion or resolution. An example of a motion might be "advertisements do more harm than good."

In any debate, there are always two sides; those who support the motion and those who oppose the motion (opposing side). There should also be an audience to listen to the arguments and to participate. The debate is controlled by the chairperson and sometimes assisted by a timekeeper in time keeping.

After the opening speeches, the chairperson declares the motion open to the floor. Anyone in the audience can now speak for or against the motion, but must get permission from the chairperson.

The final stage of the debate is to vote on the motion. The speakers and audience may vote for or against or abstain if not agreeing with either sides. The votes are counted and the chairperson announces the result and the winner.

(a)Answer the following questions with reference to the passage in the blank spaces provided.

(i)What is the suitable title for this passage?

(iii)State the main role of the chairperson in a debate.

(iv)What is the name of the group that is against the motion?

(v)Give the importance of a debate?

(ii)A debate is only conducted in schools

(iii)In any debate, two sides are involved on arguments

2.Complete the following passage by choosing the correct words or phrases given in the box and write it in the blank spaces provided.

3. Match the expressions in Column A with their meanings in Column B by writing the letter of the correct answer below the corresponding item number in the table provided. Item (vi) has been used as an example.

4.State whether each of the following sentences is a FACT or an OPINION in the blank spaces provided.

5.Study the following compass showing direction and answer the questions that follow. 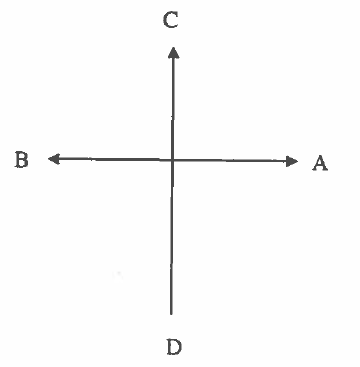 (e)Give one use of the given drawing.

6.Change each of the following sentences into plural form and write it in the blank space provided.

(a)I met a person on my way to school.

(b)He saw a ship in the Indian Ocean.

(c)My school is located at Masaki.

7. (a) Complete the following sentences using the words given in the list by writing it in the blank spaces provided.

(b) Re-write the following sentences according to the instructions given in brackets in the blank spaces provided.

(ii)Ali does not ride a bicycle. He also does not drive a car. (Join using: neither... nor)

(iii)The boy is playing football. His parents work in Unguja. (Join using: whose)

8, (a) Change the verbs in brackets into the correct form and write them in the blank spaces provided.

(b) Re-write the following sentences by changing the adjectives in brackets into their correct forms in the blank spaces provided.

9. Choose one class reader you have read either in Form One or Two and then answer the questions that follow in the blank spaces provided:

(a)Give the title of the book.

(ii)What is the name of the author?

(b)(i) Who is the main character in the story you read?

(ii) Which strength of the main character you have identified in (b) (i)?

(c)Briefly explain the weakness of the main character in (b) (i).

(d)Relate the main character you have identified in (b) (i) to your society.

(e)What have you learnt from the story you have read?

10. Read the following poem and answer the questions that follow in the blank spaces provided.

I once had a sweet little doll, dears,

The prettiest doll in the world,

Her cheeks were so red and so white, dears,

And her hair was so charmingly curled.

But I lost my poor doll, dears,

And I cried for her more than a week, dears,

But I never could find where she lay.

For her paint is all washed away.

And her arms trodden off by the cows, dears,

And her hair not the least bit curled;

Yes for old sakes' sake she is still dears,

The prettiest doll in the world.

(a)Which lines in the poem describe the beauty of the doll?

(b)If someone sings the poem, will it sound good? Give a reason for your answer.

(c)Describe the use of the word "dears" in the poem.

(d)Who is the persona representing in real life?

(e)Briefly, show the relevance of the poem to the society.