1.For each of the items (i) — (x) choose the correct answer from the given alternatives and write its letter.

(i) The furthest position from the sun in the orbit of the earth is called:

(ii)Which type of mountains results from the eruption of molten rocks from the earth interior?

(iii)Which one of the following instrument is not the component of a weather station?

(iv)The time which is recorded along the same meridian is called:

(v)Which type of climate among the following is different from the other?

(vi)Which scale is the largest among the following?

(vii)Which one of the following features are correct set of the ocean floor?

(viii)A ship moves to the west and crosses the International Date Line. What happens in regard to time gained or lost?

(ix)The height above the sea level is called:

(x)Which one among of the following is not an importance of value of forest?

2.Match the items in List A with responses in List B by writing the letter of the correct response below the corresponding item number in the table provided.

(i) Industrialization is not an agent of environment pollution ..........

(ii) One among the major characteristics of equatorial climate is high temperature and heavy rainfall throughout the year .....

(iii) The continent that is crossed by both tropics of Cancer and Capricorn is Africa .:........

(iv) The side of mountain that faces the direction of the wind is known as leeward side .......

(v) Steroids are solid heavenly bodies revolving around the sun mostly between Mars and Jupiter ......

(vi) Lake Victoria, Kyoga, Superior and Chad are among the Rift valley lakes.

(vii) Population pressures especially in big cities in Tanzania do not accelerate the improvement of social services .....

(ix) Representative Fraction (RF) is a way of expressing the scale of a map by the use of word statement ... ...

4. (a) Briefly explain the concept of human activities

5. Study the sketch map provided and answer the questions that follow:

6. Study the following climatic table and answer the questions that follow.

(i)Trans - Saharan Trade involved the exchange of goods between people of Northern and Eastern Africa ......

(ii)The development of Long Distance Trade in East Africa had a direct connection with the rise of Triangular Trade . ......

(iii)The Christian missionaries were against the abolition of slave trade.......

(iv)Industrial capitalism was characterized by open competition for markets and raw materials ...............

(v)The East African coast was known to Greeks and Romans as Azania ......

(vi) The most obvious result of the Mfecane was the depopulation of larger parts of southern Africa.....

(viii)The coming of Ngoni in East Africa led to shift from the small scale Ntemi system to weaker states ...............

(x)Written records refer to the study of our past as revealed by what has been handed down by word of mouth from one generation to another.

5.Arrange the following sentences in a chronological order by writing their roman numbers in the table provided.

(i)Development of Industrial Revolution in Europe created the need for raw materials, markets and areas for investment.

(ii)Successful treaties which were made between European agents and African rulers in 1880s marked the beginning of African colonization.

(iv)Agents of colonialism reported Africans economic potentials and the

6.Complete the following sentences in a chronological order by writing their roman numbers in the table provided....

(i)What caused the rapid expansion of white settlement to the southern African interior in the late of 1830s? .......

(iv)Learning about the past by digging up and studying objects found in the ground is known as .......

7.Study this sketch map which shows trade routes during the 15th century, and then answer the questions which follow. 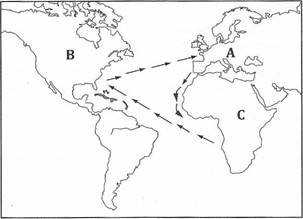 (i)In the sketch map shown, which letter represents the continent which was the source of labour? . ....

(ii)Which letter represents the continent whose natives were known as Red Indians? ....

(iii)Through which ocean was the Triangular Slave Trade conducted?....

(iv)Which letter represents the continent which specialized in the production of raw materials such as cotton, sugar and tobacco?.....

8. What were the effects of social interactions in pre-colonial African communities? Give six points.

10. Explain six factors that led to the development of trade in African societies during the pre colonial period.