1. For each of the following items (i) - (X), choose the correct answer from the given alternatives and write its letter.

(i)Lines drawn on a map joining different places with the same pressure are called:

(ii)The type of tourism which deals with visiting unaltered natural environment such as national parks, game reserves, coral reefs, forests and mountains in general can be termed as:

(iii)The following were the primary aims of establishing Tennessee Valley Authority except:

(iv)The place where mineral salts are found in Tanzania is:

(v)Which one of the following is a characteristic of water bodies?

(vi)Which one of the following are fold mountains?

(viii)A feature formed as a result of either natural or artificial depression varying in size on the earth surface is called:

(ix)Which one among the following sentences describes a longitude?

(x) Which one of the following resources are non-renewable?

2.Match the items in ListA with responses in List B by writing the letter of th correct response below the number of the corresponding item in the table provided.

4.(a) Mention five features of the ocean floor.

(b) Name the five largest oceans in the world.

(iii)If the map distance of a certain river on a topographical map is 15 centimeters, calculate the actual ground distance of that river in kilometers given that the map scale is 1:50,000.

(b) (i) Give a difference between Sketch maps and Atlas maps.

(ii) Give three types of northings.

(c) Study the map provided then answer all the questions that follow. 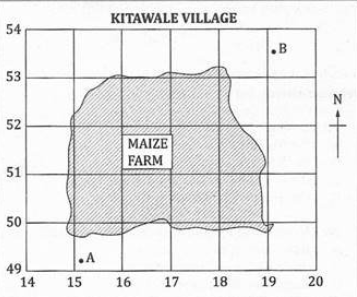 (i) Calculate the area of the maize farm in km.

(ii) Find the grid reference of point B.

6. Describe five factors for the location of manufacturing industries in the world.

7. Explain five problems that are facing the Rufiji basin project in Tanzania.

9. Explain five disadvantages of air transport to a country like Tanzania.

10. Describe five factors which enhance a conducive environment for generation of energy.