1. This paper consists of fifty (50) questions in sections A, B and C.

2. Answer all the questions in each section.

3. Read all the given instructions in the special answer sheet (OMR) and fill in all the required information.

4. Write your Examination Number and then shade the digits of the number in the respective place in your answer sheet.

6. If you have to change your answer, you must rub out the shading very neatly before shading the new one. Use a clean rubber.

8. Cellular phones are not allowed in the examination room.

1. The responsibilities of a student leader in school include to

2. The election of the Village Government Chairperson is held after every __________ years.

3. The major objective of establishing local governments in Tanzania is to

4. How many colours are in the National flag?

5. Which organ is empowered to issue bank notes and coins in Tanzania?

6. One of the activities of the National Electoral Commission is to

7. The governing system used in Tanzania is

8. When was the Secretariat of Public Leaders Ethics established?

11. Free market economy, democratic competitive politics and the development of information and communication technology are indicators of

12. Which type of mineral was discovered in large quantity in Tanzania in the year 2007?

13. The agreement for the establishment of the United Nations Organization took place in

14. The organ which is responsible for the assurance of citizens rights is

15. Who is responsible for keeping security of a family?

16. The Prime Minister of Buganda Kingdom was known as

17. One of the strategies used to weaken African technologies during colonialism was

18. One of the objectives of colonial education was to

19. A governor who introduced the Legislative Council in Tanganyika was

20. TANU was formed in Tanganyika so as to

21. The colonial explorer who signed bogus treaties with CHief Mangungo of Msovero was

22. The Zanzibar Revolution occurred in

23.The United Nations (UN) headquarters is located in

24.The child of your aunt is called

25.The first President of Mozambique was

26. In which century did the early European traders arrive in Tanganyika?

27. A feudal system which was practised by the Ha society was called

28. Human beings started to participate in trade during the

30. Who among the following is in charge of day to day activities in the school?

31. The Zambian society which conducted trade with the Yao was called the

32. One of the effects of the Portuguese rule in East Africa was

33. Which among the following is the main source of water?

34. The main source of environmental degradation in Africa is

35. The temperature is higher in Dar es Salaam and Tanga towns than in Arusha and Iringa because the temperature

36. The largest country in the African continent is

37. TPC Moshi, Kagera, Mtibwa and Kilombero are examples of industries that produced

39. The International Date Line is NOT straight because of

41. The semi-desert and dry tropical climate are found in which part of East Africa?

43. Which of the following regions of Tanzania have shown signs of desertification?

44. Which of the following groups shows planets?

Study the following map then answer questions 45, 46 and 47 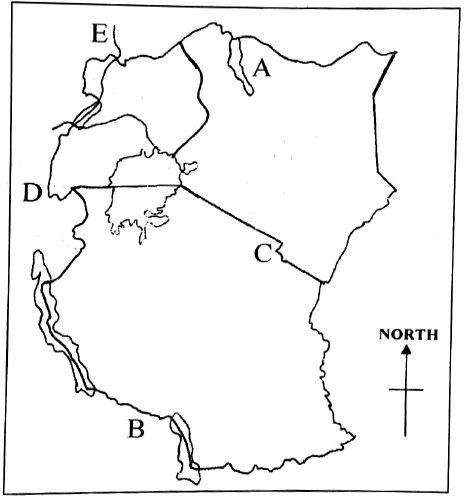 45. The famous mountain in area represented by letter C is known as

47. The country shown by letter B is famous in producing minerals known as

48. The increase of global warming, drought, floods and hurricanes are the result of

49. Which of the following lakes are found in the Eastern arm of the Rift Valley?

50. Study the following drawing then answer the question that follows: 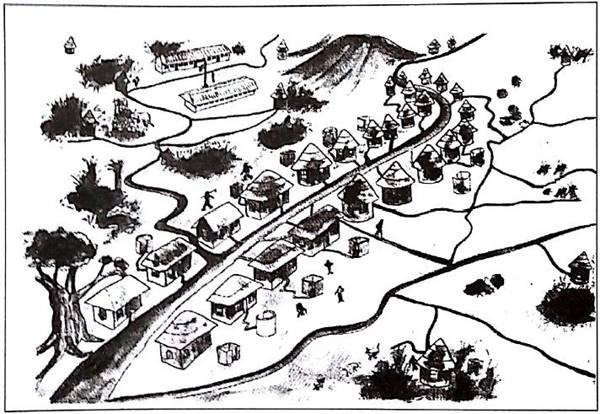 What type of settlement pattern does the drawing show?