STRUCTURE OF THE EARTH.

The earth is the third planet in the solar system which is believed to support life.

PARTS OF THE EARTH

The earth consists of two parts;

a) Internal structure of the earth

b) External structure of the earth

A. INTERNAL STRUCTURE OF THE EARTH.

The internal structure of the earth consists of different layers; these are

The crust is the outermost layer of the earth. It is referred to as LITHOSPHERE. Litho means outer while sphere means layer or shell.

The crust is formed by two parts these are; 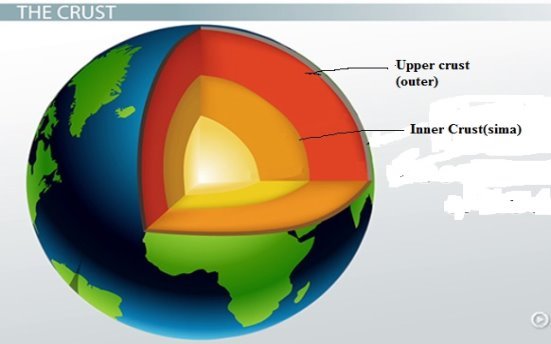 The minerals found in the earth’s crust are Silica, Aluminum and Magnesium.

The outer crust referred to as the SIAL while the inner crust is called the SIMA.

Parts of the Earth’s Crust.

a) SIAL- This is the outer most upper layer of the earth crust. It is composed of minerals such as silica and alumina.

b) SIMA: Is the inner part of the earth’s crust. It is composed of minerals such as silica and magnesium.

NB;The layer which separates between the crust and the mantle is referred to as Mohorovicic discontinuity.

The layer was discovered by a Yugoslavian geologist called Mohorovic in 1909.

The mantle is the interior part of the earth lying between the crust and the core.

The mantle is formed by two parts which are;

a) Upper layer and

The upper mantle is made up of dense igneous rocks of iron, silicon, magnesium and alluminium

The core is the central part of the earths interior. It consists of very dense rocks of nicke and iron(NIFE) 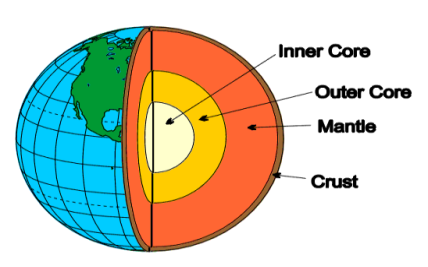 2. EXTERNAL STRUCTURE OF THE EARTH.

The external structure of the earth comprises of three parts; These are as follows;

a) The earth’s surface

A. THE SURFACE OF THE EARTH.

The earth’s surface is composed of water bodies and land surface.

Water surface composed of different water bodies like ponds, lakes, river, oceansm sea, wells, and ditches. Water bodies occupy 70.8% or 71% of all parts of the earth.

Land surface composed of different land forms like mountain plateaus, hills, valleys and plains. These occupy about 29% of all parts of the earth.

So hydrosphere is the layer of the earth which is formed by different water bodies like oceans, seas, lakes and rivers.

Hydrosphere covers about 71% of the earth. Hydrosphere is the home of different plants and animals.

This is the layer of the earth’s surface which is composed of different gases like oxygen, hydrogen, carbon dioxide, nitrogen, argon and helium.

Atmosphere is very thin layer of gases that surround the earth.

LAYERS OF THE ATMOSPHERE

The atmosphere is divided into five layers as going to be explained below;

This is the lowest layer of the atmosphere. It is found from 0 to 12 km and it contains 75% of the gases of the in the atmosphere. In the troposphere is where we human beings live and where weather ocuurs.

In the troposphere height increases with decrease of the atmosphere. The layer which separates troposphere and stratosphere is called TROPOPAUSE.

At this layer called tropopause is where we find JETSREAM and the temperature remains constantly fair.

This is the second layer in the atmosphere. It os found from 12km to 50km.

Stratosphere contains Ozone layer which is a layer in the atmosphere which acts as a shield for the earth’s surface. Ozone layer absorbs ultra-violet radiation from the sun. This causes the temperature to increase in the upper part of the layer.

NB: The layer which separates between stratosphere and mesosphere is called STRATOPAUSE.

Mesosphere lies above stratosphere. It lies from 50km to 80km in the lower part of the atmosphere.

Mesosphere protects the earth from meteoroids

Meteoroids are the heavenly bodies which are larger pieces of rocks or metals that fall from space to the earth.

The layer which separates mesosphere and thermosphere is called mesopause.

Is the layer above the atmosphere. It lies from 80km to 500km. the thermosphere means heat and sphere layer hence temperature is very high at this temperature.

The layer which separates thermosphere and the ionsphere is called Thermopause.

Thermosphere contains ionosphere which is the lower part of the atmosphere.

A rock is any naturally occurring consolidation of minerals particles that forms the earth’s crust giving it a solid nature.

The earth is formed by rocks in which some are hard while others are soft.

Rocks can be classified according to the following;

i) Mode of formation

ii) Their age or physical and chemical characteristics.

Classification of rocks according to their mode of formation.

According to the mode of formation, rocks can be classified into three classes;

The word igneous is derived from the Greek word Ignus meaning fire. Igneous rocks are rocks formed by cooling and classification of molten materials from the interior of the earth.

Intrusive igneous rocks are further divided into two categories; that is;

Are rocks formed by the magma that cools more rapidly on or near the surface of the earth and produces fine textile igneous rocks e.g basal. Other examples of plutonic rocks are granite, diorite and gabbro.

These are formed when magma is mixed with other rocks

Note that volcanic rocks are formed in two ways;

a) When lava flows to the surface before cooling and solidifying e.g basalt, andesite, rhyolite and absidian.

b) When lava is ejected during volcanic eruptions, e.g pumice

CLASSIFICATION OF IGNEOUS ROCKS BY THEIR CHEMICAL COMBINATION

According to the chemical composition, igneous rocks can be classified as follows;

Are igneous rocks which contain great amount of silica and feldspar with very little or no any other metallic element. E.g granite, granophyres, rhyolite and absidian.

These are rocks which consists of large amount of magnesium, iron and other minerals like alluminium.

These are igneous rocks which consists o very large amount of metallic elements like iron, magnesium and little amount of silica. Example is polidolite.

 Are very hard and not stratified

 Are formed by cooling and magnification of magma

 Can be acidic or basic or intermediate depending on silica amount

 They are crystallined in nature

 They don’t have fossils, that is, they do not contain fossils of animals remains.

 Igneous rocks are called mother rocks because other rocks originates from them.

These are rocks which are formed by the process of sedimentation. Especially during weathering.

Sedimentation is the deposition and accumulation and lithification of sediments of some weathered rocks and other materials.

Particles or sediments are deposited by the following agents;

The materials are deposited in large strata to form sedimentary rocks.

Ways in which sedimentary rocks are formed;

They are formed in three ways;

are rocks formed by compaction and comentation of sediments which have been laid down on land or sea floor.

Mechanically formed sedimentary rocks are also called plastic rocks because they consists of fragments of rocks and rock minerals. Examples are;

i) Argillaceous rocks; they contain small amount and fine particles of silt e.g shale and mudstone.

Others are formed chemically/ mixture of different minerals eg carbonates like traventure found in form of stalagmites and stalactaties. Due to precipitation of calcium carbonate.

Sulphates as a result of dessification and evaporation of rocks like gypsum in which hydrated calcium carbonate may be formed.

Sedimentary rocks are formed by deposition of clastic sediments organic matter or chemical precipitates, evaporates followed by compaction of particulate matter and comentation during diagenesis. Sedimentary rocks form near surface of the earth.

Are formed by remains of once living organisms examples calcareous rocks like lime stone and skeleton.

These are also carbonaceous rocks formed from remains buried thousands of years under high pressure and temperature.

Metamorphic means change in appearance. They are rocks formed when one type of rocks-igneous or sedimentary change its form after being subjected to either intense heat pressure or both.

Any rock may undergo changes to form metamorphic rocks as shown below;

a) sedimentary rocks to metamorphic rocks,

Metamorphism is the process by which rocks of the earths surface change their appearance from one type to another type of a rock.

The collision with other agents of erosion causes the following breaking down of rocks.

It is associated with fault planes. It is caused by the frictional heat generated by fault movements. This is due to crushing and grinding of rocks.

Is the one which takes place in the large areas especially mountains ranges. It occurs due to the collisison of two continental plates hence high temperature and pressure lead to the disintegration of rocks from existing ones.

This is a scheme or a chart that indicates age classification of rocks and associated geo-morphological and biological events.

Geological time scale extends about 600 million years and is divided into three eras;

Among the above, eras, palaezonic is the oldest while cainozoic is the youngest.

The eras are subdivided into periods.

a) The geological time scale is divided into ERAS

b) The eras are further divided into PERIODS

c) The periods are then divided into EPOCHES

d) The epochs are eventually divided into AGES 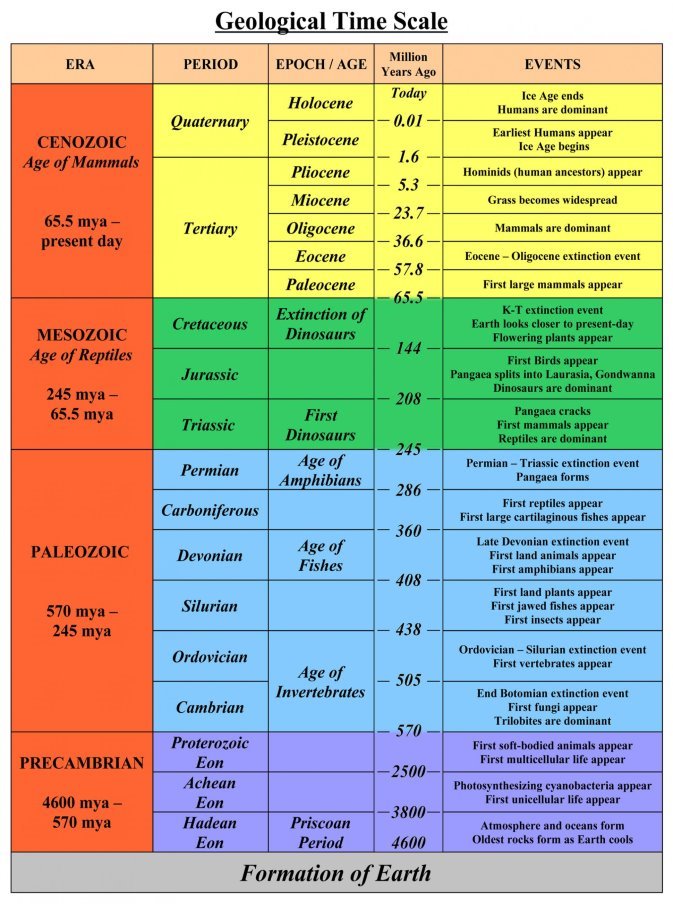