THE SUBJECT MATTER OF COMMERCE.

The student should be able to:

1 . Explain the nature and the subject matter of commerce.

3. Explain the importance of commerce in everyday life.

4. Distinguish between commerce and economics.

5. Discuss the development of commerce in Tanzania

Barter trade- This is a type of trade which deals with exchange of goods for goods.

Utility- This is the ability of goods to satisfy human wants

Direct service- involves direct contact between the service provider and the customer.

Trade- this is the buying and selling of goods and services with an aim of making profit.

Home trade- this is a type of trade which is carried out within the bounderies of a country.

Foreign trade- is a type of trade carried out between two countries or more.

Commodity- This refers to goods or products that are produced for resale.

Aids to trade- these are things which facilitate trade

Commerce is a branch of economics which deals with the study of distribution and exchange of goods and services from the producer to final consumer.

The aim of undertaking trading activities is to earn profit. Profit is an incetive or reward for undertaking commercial activities. Any activity which does not have the incentive of profit will not be part of commerce.

The elements of commerce are of two types,

Trade and Aids to trade.

Trade is the buying and selling of goods and services. It is further divided into home trade and foreign trade.

a) Home trade or local trade.

This a type of trade which involves buying and selling of goods and services within a country. It is sub-divided into two branches.

i) Retail trade- This refers to selling of goods in small quantities to final consumers. It is carried by small scale retailers who buys goods in large quantities from wholesalers and manufacturers.

b) International trade- This is also called foreign trade. It involves buying and selling of goods and services between two countries. It is divided into two categories;

These are activities that facilitate trade and are also called facilitators of trade. They enable trade to take place smoothly. Examples of Aids to trade includes;

Banks provide financial services. They help in safe keeping of money, cheques, and other valuable substances. They avail money when needed to help in buying and selling of goods and services. In international trade, payment is made using cheques, bankers draft, bills of exchange, or documentary credit.

Banks also give advice to traders on various trading matters. They also provide financial assistance in terms of loans.

In case of loss, insurance companies are able to compensate traders so that they can continue trading smoothly. Such losses can arise from theft, fire, accidents etc.

Transport- This is the movement of goods, services and people from one place to another. Through transportation, goods can be made available when needed and at the right time. Transport can be road, railway or sea.

This is the storage of goods in safe place or building, as the goods awaits clearance or purchase by customers. It enables production to take place in anticipation of demand by ensuring that the already produced goods are stored safely in a warehouse. It also ensures constant flow of goods services and raw materials in the market. For example in international trade, warehousing acts as a store for goods waiting shipment, customs clearance and sales.

e) Advertisement- This involves the creation of awareness of goods and services. This enables consumers to reach them. The intention of advertisement is to increase the volume of sales. Advertisement can take place through, radio, social media, email, You tube, posters and Bill Boards. 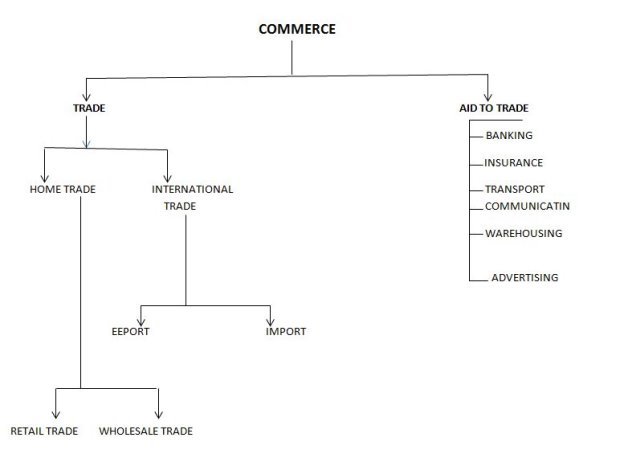 Importance of commerce in our daily life;

Commerce is very important for the following reasons.

Economics is the practical science of the production of wealth. It is the study of how man can use scarce resources to satisfy his needs and wants.

 Commerce is the practical economics or business economics

 Both commerce and economics deals with the same subject matter

 The purpose of economics is to to show how and why it works and seeks out ways of improving its efficiency.

The Development of Commerce in Tanzania.

Trade and aids to trade in Tanzania has taken several stages before it become fully operational. Two phases of commerce developments can be identified, these are;

This is a stage where no official commerce existed.

This stage is characterized by the following features;

i) Earlier stage of economics life

ii) Direct production where there is no surplus

iii) No division of labour and specialization

v) No commercial activities; no exchange nor distribution of goods

This is a form of trade which involved the exchange of goods for goods. It is one of the earliest forms of trade. The features of barter trade included the following;

i) Lack of double coincidence of wants.

It became hard for one to find a customer who needs what he/she is offering and also has what one wants. For exchange a farmer who has maize, and wants to exchange with goats will have to look for a person who has goats and wants maize. This might not be easy.

ii) Lack of measure of value

iii) Lack of store of value

Under barter system, it was not possible to store the value of perishable goods, like milk, vegetables, fruits, and fish for a longer period of time.

Under barter system, the borrowing and lending was made in terms of goods. It was difficult to decide whether the same value was returned later or not.

Money As a medium of Exchange.

The use of money as a medium of exchange arose from the challenges of barter trade. By definition, money is anything that is easily accepted as a means of exchange in trade.

The following are characteristics of money;

With time people started meeting in various market places to carry out trade. Farmers could come over with their agricultural produce to sell to customers. Customers could also come over to purchase what they wanted.

Through this commercial interactions, some of these markets grew to become major towns.

National economy and growth of commerce.

The national economy and stage has many features; these included the following;

1. Choose the most correct answer.

(i) Which of the following is not a nature of commerce?

(ii) Which of the following is an indirect service?

(iii) Which is not a characteristic of good.

(vi) A foregone satisfaction as a result of making a choice is called?.

(vii) Occur when product is manufactured to a final and usable product.

(x) Which of the following is not a drawback of barter trade?

3. (a) Differentiate between a good and a service.

(b) Describe six characteristics of a service.

4. (a) Explain the meaning of the following.

(b) Outline importance of Commerce in our daily life.