2.Answer all questions in sections A and B and one (1) question from section C.

3.Calculators and cellular phones are not allowed in the examination room.

4.Write your Examination Number on every page of your answer booklet(s).

5.Where necessary the following constants may be used:

1.For each of the items (i) – (x), choose the correct answer among the given alternatives and write its letter beside the item number.

(i)One advantage of the lead-acid accumulator is that

(ii)When an object moves around a horizontal circle of centre O with a constant speed its acceleration will be:

(iii)A total eclipse of the Sun is due to

(iv)Short-sightedness in a human eye is due to 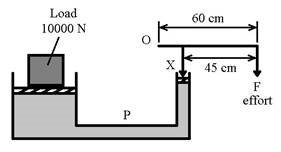 What will be the value of force X applied to the press?

(vii)Lenz’s law can be applied to predict the

(viii)The half-life of a certain radioactive element is 12 hours. What fraction of an element will have disintegrated in 72 hours?

(ix)The mass of an atom depends on the number of

(x)The interior structure of the Earth is composed of three major zones which are:

2.Match the items in List A with responses in List B by writing the letter of the correct response beside the item number.

3.For each of the items (i)-(x), fill in the blank spaces by writing the correct answer on the answer booklet provided.

(i)Refractive index is a constant involved in .

(ii)The parallel forces which are equal in magnitude but acting in opposite direction to each other are known as .

(iii)Latent heat of vaporization is responsible for changing the state of a substance from liquid to vapour without changing of .

(iv)The multiple reflection of sound waves when they are placed in an enclosed room or cavity is called .

(vi)Radiant energy can be detected by means of .

(vii)In order to measure the current passing through an electric component, ammeter is always connected in .

(viii)Geocentric theory under astronomy study was based on .

4.(a) Why does a solid body weigh more in air than when immersed in a liquid?

(b) An ordinary hydrometer of mass 27 g floats with 4 cm of its stem out of water. If the cross sectional area of the stem is 0.75 cm2 calculate:

(i)the total volume of the stem just under the surface of the liquid.

(ii)the relative density of the liquid.

(c) (i) What do you understand by resolution of a force?

(ii) A metre rule is pivoted at its mid-point. If two objects of weights 1.0 N and 2.0 N are suspended at 30 cm and 90 cm respectively from one end, calculate the position where an upward force of 3.0 N must be applied in order for the metre rule to balance horizontally.

(b) Two stones are thrown vertically upwards from the same point with the same velocity of 20 m/s but at an interval of 2 seconds. When they meet, the second stone is rising at 10 m/s. Calculate:

6.(a) (i) Explain how a gas exerts pressure on the walls of its container.

(ii) Give reason why it is not sensible to rub the canvas of a tent in wet weather.

(b)Explain two situations in which the phenomenon of surface tension is exhibited.

(i)estimate the length of an oil drop.

(ii)what assumption have you made in calculating part (c) (i) above.

7.(a) (i) Differentiate between resistance and resistivity of a given conductor.

(ii) Is it possible for two cells in parallel arrangement to drive more current through a resistor than one cell? Give reason.

(b) (i) What is ‘1 KILOWATT-HOUR’ as applied to current electricity?

(c)(i) What is the major cause of global warming?

(ii) Briefly explain three measures that can be taken to control global warming.

(b) (i) What is meant by background count? Give two sources of

radiations always present in a neighbourhood of a detector.

(ii)How does the rate of escape of electrons from a metal relate to its temperature?

(iii)A sample containing 400 g of iodine-131 has a half-life of 8 days. How much of the sample will remain undecayed after 40 days?

(c) A radioactive material is denoted by the symbol 22688????. Write down the composition of the nucleus during the end of the following stages of disintegration.

(i)the emission of an alpha-particle.

(ii)the further emission of a beta-particle.

(ii)Briefly explain the mode of action of a forward bias in a p-n junction. 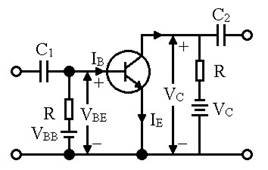 (i)Why is the circuit named so?

(ii)Explain the function of capacitors C1 and C2.

11.(a) State the application of each of the following apparatus:

(ii)With the help of a labeled diagram explain the principle on which the siphon operates.

(c)(i) Briefly explain why a bubble of air increases in volume as it rises from the bottom of a pond to the surface.

(ii)A uniform tube 1.0 m long and closed at its upper end is pushed vertically downward into mercury until the liquid rises 0.2 m inside the tube. Calculate the depth of the open end below the mercury surface.