2.Answer all questions in sections A and B and two (2) questions from section C.

3.Electronic calculators are not allowed in the examination room.

4.Cellular phones are not allowed in the examination room.

5.Write your Examination Number on every page of your answer booklet(s).

6.Where necessary the following ants may be used.

1. For each of the items (i) - (x), choose the correct answer from among the given alternatives and write its letter beside the item number.

(i)Relative humidity is defined as:

(ii)A rod is brought close to the cap of a charged electroscope causing the leaves of the electroscope to collapse. This indicates that:

(v) What happens when a liquid changes into gaseous state?

(vi)    The electromotive force of a dry cell is derived from chemical reaction of:

What do you find when conducting an experiment of expansion of solids, liquids and gases at the same temperature change?

(viii)Ocean tides are caused by

is one which can be used in power generation. In this case the values of x and y are:

2. Match the items in List A with the responses in List B by writing the letter of the correct response beside the item number.

(b) (i) Briefly explain, when does a force become weight?

(i)Calculate the maximum pressure it can exert on the ground. How is it experienced?

(ii) Calculate the minimum pressure it can exert on the ground. How can this be observed?

(i) Most materials become less dense as the temperature is increased.

(b) (i) Mention three differences between temperature and quantity of heat.

(ii) What is the use of a clinical thermometer?

5.(a) (i) Distinguish between spectrum and dispersion of light.

(ii) Draw a diagram to show an angle of deviation when a ray of light passes through an equilateral glass prism.

(b) (i) How does the additive theory of light differ from the substractive?

(ii) What are primary colours and complementary colours in the substractive theory of light?

(c) A converging lens produces an upright image four times the object height. If the focal length is 25cm, find the object distance.

6. (a) (i) Mention two methods of making a semiconductor more conducting.

(ii) Why are the charge carriers in P-type doped semiconductors?

(b) One end of an N-type doped semiconductor is heated.

(i)State what is expected to develop between the heated and the cooled ends.

(ii)Identify the negative end of the two ends.

(c) (i) Explain the property of a semi conducting diode that makes it ideal in the rectification of an alternative current.

(ii) Sketch a graph of voltage against time for half-wave rectification of an alternating current.

(ii) Why does a transformer work with alternating current (a-c) only?

(b) State two ways in which power is lost in a transformer.

(i)How many turns are there in the secondary?

(ii)What is the efficiency of the transformer if the current drawn from 240V supply is 125mA?

(b) Study the Figure below, then answer the questions that follow: 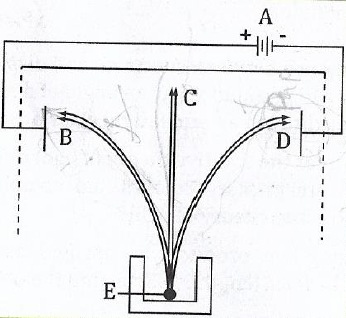 (i)What does each of the letters represent?

(iii)Write the basic differences between the rays represented by symbols B and D.

(c) A radioactive element nucleus M decays into an element N by ß-emission according to the following equation:

(i)Write the values for x and y.

(ii)What is the number of proton in N?

(iii)What are the mass numbers of elements M and N?

(i)Calculate the volume of the cork immersed in the water.

(ii)What force is needed to immerse the cork completely? (Assume mass of lg has weight of 0.01 N)

(c) Ice has a density of about 0.9g/cm3. What fraction of the volume of an iceberg is submerged in water?

(ii) A ball of mass 0.2kg is dropped from a height of 20m. On impact with the ground it loses 30J of energy. Calculate the height it reaches on the rebound.

(ii) How can transistors be connected to form an amplifier circuit?

(b)Draw a fully stabilized common emitter amplifier circuit and explain the function of the components used.

(c) Draw the graphs for the common emitter transistor characteristics.

(b)With the aid of a diagram, explain how x-rays are produced.