(i)The well known matrilineal societies in East Africa by the nineteenth century were the:

(ii)Effective Oman control in East Africa was established during the:

C. second half of the 19th Century.

(iii)The main factor for the decline of the Trans-Saharan trade in the 16th century was the:

A.spread of the Islamic Jihads in West Africa.

B.between the Pangani and Rufiji rivers.

D.in the Northern Zone of Tanganyika.

(v) One of the features of monopoly capitalism was:

A. emergence of finance capital.

(vi)Which of the following was not a strategy of ensuring constant supply of labour in colonial agricultural and mining investments in Africa?

E. Changing the pattern of consumption of people.

(vii)Which ofthe statements below is not true about the introduction of colonial economy in East Africa?

D.The introduction of new crops such as sisal, cotton and pyrethrum.

A. provision of loans and aid with some conditions.

C. provision of grants to strong African governments and leaders.

(ix)Members of the Economic Community of West African States include:

(x)The following is not a function of the African Union:

A.To ensure peace and security in the African continent.

C.To promote international cooperation in line with the Charter of the United Nations Organization.

D.To promote unity and solidarity of the African States.

2. (a) Match the responses in list B with the word/phrases in listA by writing the letter of the correct response beside the item number.

C.The company that spearheaded the Boer Trek in South Africa

E.A dialogue among the poor countries for solving their problems without relying on the developed countries

G.Is formed by the combination of labour, objects of labour and means of labour

H.The title given to the Prime Minister of Buganda Kingdom

I.The non-interference accord between US and Egypt signed in 1978 at Camp David

J.The legislative body in the Kingdom of Buganda

(b) Arrange the following statements in a chronological order.

(i) This allowed him to devote some of his time on other activities such as craft and trade.

(ii)This was marked by the spread of agricultural communities in areas where there were fertile, arable land and reliable rainfall.

(iii)By then the Iron Age in East Africa had reached an advanced stage.

(v)By about the 15th century, village communities had emerged in various parts of East Africa. 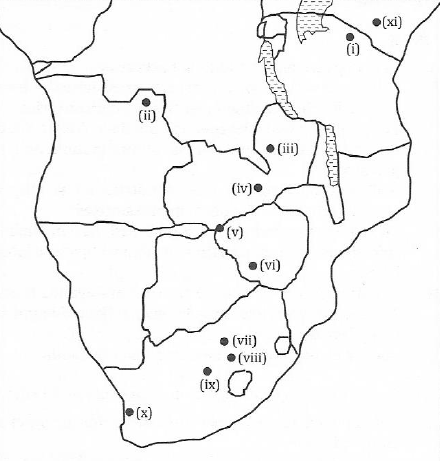 4.In each of the items (i) — (x) below, there are five statements. One of the statements is WRONG. Identify the wrong statement and write its letter beside the item number.

(i) A. Oral tradition is the study of the past as handed down by words of mouth from one generation to another.

B. Oral tradition is mainly useful to illiterate societies.

C. Oral tradition can be obtained through the use of cultural practices such as music, poems, songs, proverbs and riddles.

D. Oral traditions are not biased.

(ii) A. The fall of Bunyoro-Kitara was contributed by the external attacks.

B.Due to the big size of Bunyoro-Kitara, the King was not able to hold and rule it effectively.

C.The good climate that favoured production of food crops and keeping of livestock contributed to the fall of Bunyoro-Kitara.

D.All of the borders of Bunyoro-Kitara were open to attack from enemies.

E.Some parts of Bunyoro-Kitara pulled themselves out of the entire systems so as to become independent.

(iii) A. The East African Long Distance Trade involved the Arabs and Nyamwezi.

B. One of the principle exports during Long Distance Trade was ivory from the interior.

E.The Arabs were not interested in slaves during Long Distance Trade.

(iv)A. The Berlin Conference of 1884/1885 was an imperialist conference which brought together European and African Chiefs to divide Africa.

B. The Berlin Conference of 1884/1885 legalized the division of African countries among European capitalists.

C.The Berlin Conference of 1884/1885 also solved the conflicts among the European powers over African land.

D.The Berlin Conference of 1884/1885 declared the basins of Nile, Niger and Congo rivers as free zones.

(v) A. The presence of routes which had already been established by long distance traders facilitated colonial penetration into the interior of East Africa.

C.The presence of translators such as missionaries who had already studied local languages enhanced penetration in the interior.

D.Possession of superior weapons such as firearms enabled the colonialists to defend themselves in their struggle to penetrate the interior.

E.The colonialists provided bribery to local rulers which made the colonialists to be accepted by all Africans as they were penetrating to the interior.

(vi) A. The French administered their colonies through direct rule system.

B.Under this system the French endeavored to incorporate the colonized people constitutionally and administratively as French subjects.

C.At the top was the Minister for the colonies based in Paris.

D.Under the Minister was the Governor, one in each of the 10 French colonies.

E.Under the Minister was the Governor General stationed at Dakar.

(vii) A. The South African Boers introduced the Bantustan policy in South Africa as one of the strategies to control liberation struggles.

B. In addition, they encouraged the formation of the Patriotic Front.

C.Besides, they passed a law prohibiting Whites to marry Blacks.

D.Moreover, they established the constructive engagement policy in the neighboring Namibia.

E.The Nkomati Accord between South Africa and Mozambique was another technique.

(viii) A. The Second World War was an imperialistic war.

Britain, France, Russia and Germany were decisively defeated in this war.

C.The war caused intensive destruction of the resources and people.

D.Land use and rehabilitation schemes were introduced to revamp the devastated economy.

E.The war, however, accelerated the struggle for independence in the colonies.

(ix) A. One of the United Nations' agencies is the UNDP.

B.The African Unity is to ascertain the extent influenced by the European Union foreign policy on the nature of its economic strategies.

C. The East African Community has got no Secretariat.

D. Edem Kodjo was once the OAU Secretary.

E. Uganda is not a member of SADC.

(x) A. The first prime minister of Tanganyika was the late Mwalimu J. K. Nyerere.

B. Mwalimu J. K. Nyerere continued to be the Prime Minister until 1964 when Tanganyika and Zanzibar united.

C.Other Tanzanians who had served as prime ministers include Rashid Mfaume Kawawa and the late Edward Moringe Sokoine.

E. Following his assassination in 1972, Karume was succeeded by Aboud Jumbe Mwinyi as the second president of Zanzibar and First VicePresident of the Union Government.

5.What were the effects of the discovery of iron technology in African societies?

6.Using specific examples, explain how the expansion of the Ngoni people during the nineteenth century affected the people of East and Central Africa.

8.Explain the main causes of the First World War.

9.Explain the methods that were employed by the black society in South Africa in the struggle for their liberation.