1. Read the passage below carefully and answer the questions that follow.

To achieve the objective of a development plan, the whole nation must work as a team. We must marshal all the help we can get for the struggle. And in working for the future, we must guard all that is valuable in our inheritance.

We in this country have great natural resources. First, we have the people who are enthusiastic, friendly and law-abiding. This is our great asset in development. But we have also good land and minerals. And we have wildlife such as those found in a few other parts of the world. These things we must preserve, and put at our service. Perhaps, the most important of all, we must retain the values of our brotherliness, or family-hood, which our fathers had. Our task is to widen those values not to eradicate them. This is in fact, the purpose of all our work and all our plans; the creation, through African socialism, of our country in which we can all live proudly as brothers.

The tasksbefore us are immense surveying them. We might be inclined to ask like the baby centipede; 'How do we start? Which leg do I move first?' And the answer is the same as he was given: 'Move child, move!' No one of us can solve all the problems in front of our nation, but as each of us does his own task, so progress will be made.

(i) In paragraph 2, the writer suggests that the part of our inheritance which we must guard most carefully is:

(ii) The writer declares that:

(iii)The point of the story about the centipede is that:

(iv) The writer's intention in the last two sentences is to:

(b) Complete the following sentences by filling in the blank spaces with appropriate information from the passage.

Climate is the most important factor in soil formation. It has two components - temperature and rainfall. Vegetation, micro-organisms and animals including man, greatly influence the formation of soil. Vegetation exerts its main influence on soil formation through the amount and nature of the organic matter that it adds to the soil. Relief influences soil formation primarily as a factor affecting erosion and as a modifier of climate and water-air relationships.

Parent material is the initial state of the soil system as it represents the weathered rock materials from which the soil develops. The kind of soil that develops depends in part upon the kind of parent rocks and parent materials which influence the physical and chemical properties of the resulting soil. The maturity of a soil is determined by the time factor. The length of time required for a soil to develop horizons depends upon many inter-related factors such as climate, nature of the parent material, organisms and relief.

3. Complete the following sentences with the suitable word among the words given below. Write the correct word against the item number. More; much; lot; enough; many; little; any; not.

4. In each of these sentences one word is wrong. Correct them by writing the correct word.

(i) I'm very happy today. I've got a letter from my deer friend.

(iii) I saw a flock of cattle when I was crossing river Honia.

5.Study the following diagram, read the passage that follows it and answer the questions. 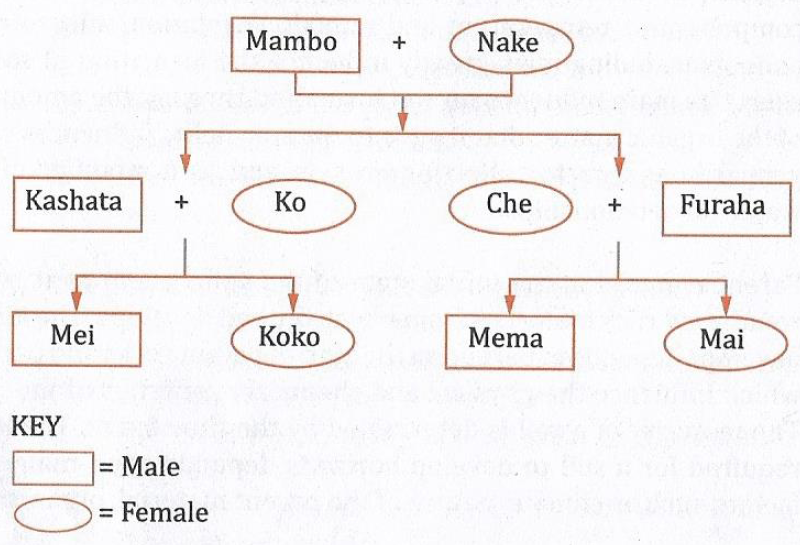 (d) What does Mei call Che?

6. Rewrite the following sentences according to the instructions given after each.

(a) He did not only wash his face but also combed his hair.

(b) "I have been studying English Language for four years," he said.

In 1986 Boko was going to school at Kimashuku Secondary School.

8.Arrange the following sentences in chronological order to make a meaningful paragraph by writing the right letter against each item. For example (i) - E

A.Organisms that spread disease without being affected by the diseases themselves are called vectors.

C. For example, a fly walking over faeces or a decaying carcass will get bacteria on its feet and body.

E.If it then makes contact with your skin or your plate, the bacteria will be passed on and those bacterial cells could travel into your body.

9.Match the items in list A with responses in list B to make meaningful sentences by writing the letter of the correct response beside the item number.

B. You have been appointed to be a principal speaker of the motion: "Prostitution must be discouraged in our country." Argue for the motion in 250 words.

C. In not more than 250 words, write a composition on: "Motor Accidents in Tanzania roads, their causes and suggest ways on how this problem could be controlled."

D. Write a letter to the Manager, Mtwara Cooperative Union, Makonde Street, P. O. Box 345 Mtwara. Apply for the post of Accounts Clerk as it was advertised in the Daily News of Thursday June 15th, 2009. Sign your name as Doto Majaliwa Kazimoto.

Answer two (2) questions from this Section. One question should be selected from poetry and the other from novels and short stories or plays.

11. With reference to the poem below, highlight the central theme and relate it to what is currently happening in our society.

Death, be not proud - by John Donne (England)

Death, be not proud, though some have called thee

For those whom you think'st though dost overthrow Die not, poor Death, not yet canst though kill me.

From rest and sleep, which but thy pictures be,

Much pleasure — then from thee much more must flow; And soonest our best men with thee do go, Rest of their bones and souls's delivery.

Though art slave to fate, chance, kings and desperate men,

And dost with poison, war and sickness dwell;

And poppy or charms can make us sleep as well,

And better than thy stroke. Why swell'st thou then?

One short sleep past, we wake eternally,

And death shall be no more. Death, thou shalt die.

12.When trying to follow foreign culture, the African finds himself or herself divorced from both his culture and the foreign one. Using four (4) poems show how this is true.

13.With reference to two (2) novels or short stories, analyse the sources of conflicts the writers present.

14.Different groups of people and individuals have different goals and interests which are sources of conflict in the society. Justify this statement by referring to two (2) plays you have read under this section.